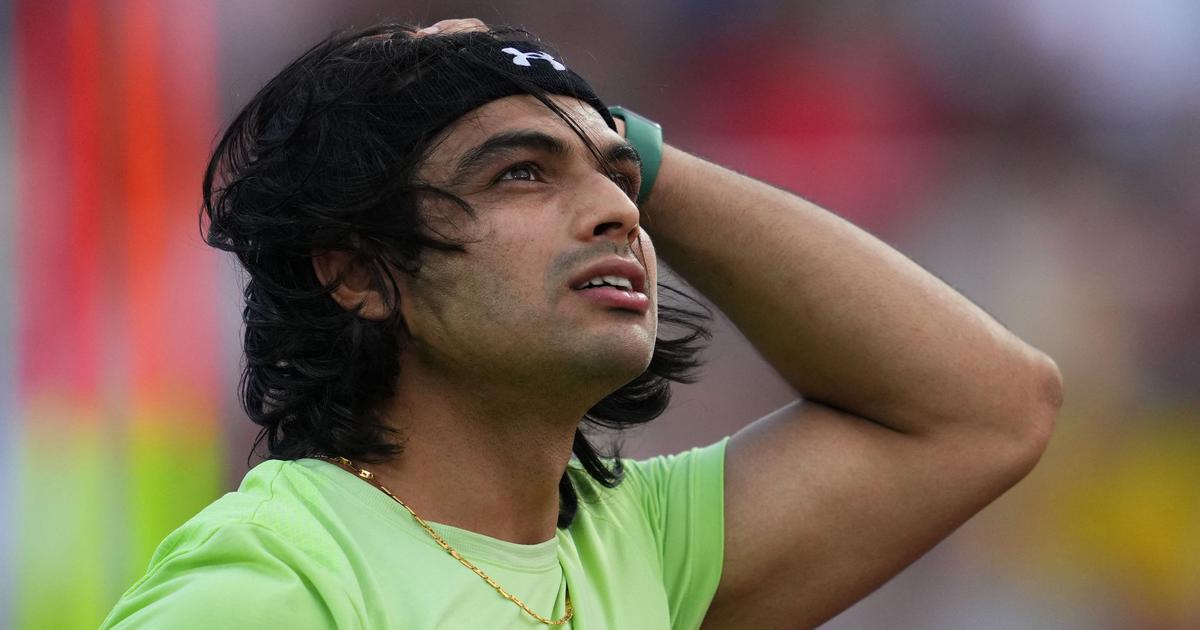 New Delhi: Olympic champion Neeraj Chopra has expressed his disappointment at losing out the opportunity of leading the country as flag bearer at the opening ceremony of Birmingham Commonwealth Games on Thursday after he sustained a “minor” groin strain during his historic silver medal-winning campaign at the recent World Championships.

The 24-year-old superstar was all set to defend his title in Birmingham, but pulled out of the multi-sport event after his medical team advised a month’s rest after MRI scan showed a minor injury.

“… I am hurt about not being able to defend my title and missing out on another opportunity to represent the nation. I am especially disappointed about losing out on the opportunity to be Team India’s flag bearer at the opening ceremony, an honour I was looking forward to having in a few day’s time,” Chopra wrote on his social media handles.

“For now, I will focus on my rehabilitation and hope to be back in action very soon. I would like to thank the entire country for all the love and support I’ve received over the past few days, and urge you all to join me in cheering on my fellow Team India athletes in Birmingham over the coming weeks. Jai Hind.” The development is a huge setback to the country’s CWG campaign was Chopra is a strong medal contender though not a sure shot favourite for gold. Grenada’s Anderson Peters, who beat Chopra for gold in the World Championships in Eugene, USA, on Sunday, is also taking part in the CWG.

Peters had won a bronze in the last Commonwealth Games in 2018 in Gold Coast where Chopra had won gold.

Chopra’s injury and pulling out will mean that the much-anticipated clash with Peters will not happen in Birmingham.

Chopra became only the second Indian athlete to win a medal at World Championship after Anju Bobby George, who had won a bronze in long jump in 2003 in Paris.

After his silver medal-ensuring 88.13m throw in the fourth attempt, Chopra had felt some unease in his right thigh and his worst fears have come true.

“I thought even the fourth throw could have gone farther. After that, I felt something on my thigh and could not do my best in next two. I had strapping (on thigh),” Chopra had said after his event.

The injury and one-month rehabilitation will also meant that Chopra’s season has virtually ended. He had kept his options open about participating in the Monaco (August 10) and Lausanne (August 26) legs of the prestigious Diamond League Meetings series after the CWG. He had earlier said that he would love to compete in the Diamond League Finals and become a champion.

This year’s Diamond League Finals is scheduled for September 2 and 3 in Zurich.

In the Stockholm leg of the Diamond League Meetings on June 30, Chopra had finished second with a best throw of 89.94m behind Peters who won the event with a massive effort of 90.31m.

Chopra said he had discussions with his support team, the IOA, AFI and SAI’s CAIMS and collectively decided to skip the CWG, keeping in mind his long-term goals and to avoid risking any further aggravation of the injury.

“On having it investigated medically yesterday by a group of doctors here in the US, a minor strain was discovered and I have been advised to undergo rehabilitation and give it rest for the next few weeks,” Chopra added.

On Tuesday, Indian Olympic Association Secretary General Rajeev Mehta had said that Chopra underwent an MRI scan in the USA and has been advised one-month rest.

“Team India javelin thrower Mr. Neeraj Chopra had called me earlier today from the US to convey his inability to take part in the Birmingham 2022 Commonwealth Games owing to fitness concern,” Mehta said.

“Following his participation in the 2022 World Athletics Championships in Eugene, Mr. Chopra had had an MRI scan done on Monday and, based on it, he has been advised a month’s rest by his medical team,” Mehta added.

Chopra was also the flag bearer of the Indian contingent during the inauguration ceremony of the 2018 Asian Games in Jakarta.

Neeraj Chopra ruled out of CWG 2022 due to injury, says IOA