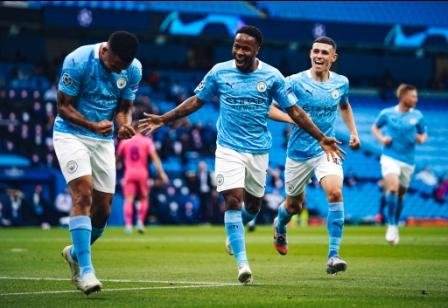 Manchester: Manchester City qualified for their first ever Champions League final after Riyad Mahrez’s double ensured a 4-1 aggregate win over Paris Saint-Germain in the second leg of the semi-final.

Mahrez’s goals either side of half-time secured a 2-0 victory after his free kick last week earned City a 2-1 win in Paris against last season’s beaten finalists, DPA reports.

Angel Di Maria was later sent off for lashing out at birthday boy Fernandinho to end any slim chance PSG had of a comeback.

City could meet Premier League rivals Chelsea or 13-time record winners Real Madrid in the Istanbul final on May 29. The second semi-final concludes in London on Wednesday with the teams tied at 1-1.

The victory means City could complete a treble of Champions League, Premier League and League Cup titles this season but it was Chelsea who ended their quadruple dream in the FA Cup semi-final.

“We didn’t have a very good first half, but we scored the goal,” Mahrez told BT Sport. “In the second half we played very good and could have scored more.

“They lost their nerves and started kicking us. After the red card it was more comfortable for us.

“We have a game on Saturday we have to win to be [domestic] champions, and then we can concentrate on the final.”

It also ends a four-year semi-final losing streak in European’s elite competition for manager Pep Guardiola, who led Barcelona to Champions League titles in 2009 and 2011.

PSG had Kylian Mbappe in their squad after he picked up an injury in the first leg but left him on the bench to initially peer at torrential rain, sleet and hail from the stand. That he was not used even in desperation suggests he was not fully fit.

The guests, who had previously won first leg ties at Barcelona and holders Bayern Munich, were busy early on and had a handball penalty correctly overturned when the ball hit Oleksandr Zinchenko’s shoulder.

Zinchenko was involved in the 11th minute when goalkeeper Ederson sent him clear on the left and he found Kevin De Bruyne, whose shot was deflected.

The ball could have gone anywhere but fell perfectly for Mahrez to finish.

“Of course, Ederson’s long pass was planned,” said Mahrez. “We know he is capable of putting the ball in the other goal and we work it all the time and today it worked.”

In the 63rd minute De Bruyne, whose equalizer turned the tide of the tie last week, was again crucial as he fed Phil Foden to cross for Mahrez to ram home at the back post.

That settled matters with PSG needing three goals to secure an unlikely comeback.

“We fought to the end. We can look each other in the eyes, having tried everything,” said PSG midfielder Marco Verratti.

“That’s two years in a row we’ve reached the last four. We had a good run. I don’t know what to say: we wanted to reach the final and we couldn’t do it.”

Their best chances came straight after the opener when captain Marquinhos, who scored in the first leg, headed onto the bar.

Di Maria then shot wide with Ederson out of position following a sudden change of possession, but PSG struggled to create opportunities against a resolute City defence, who congratulated each other for almost every block and tackle.

Frustration boiled over for Di Maria when he petulantly kicked out at Fernandinho, who celebrated his 36th birthday in the best possible way, following a minor spat and like the first leg PSG ended with 10 men.

Foden hit the post late on as PSG grew resigned to their loss and City cruised to within one game of a maiden European crown.