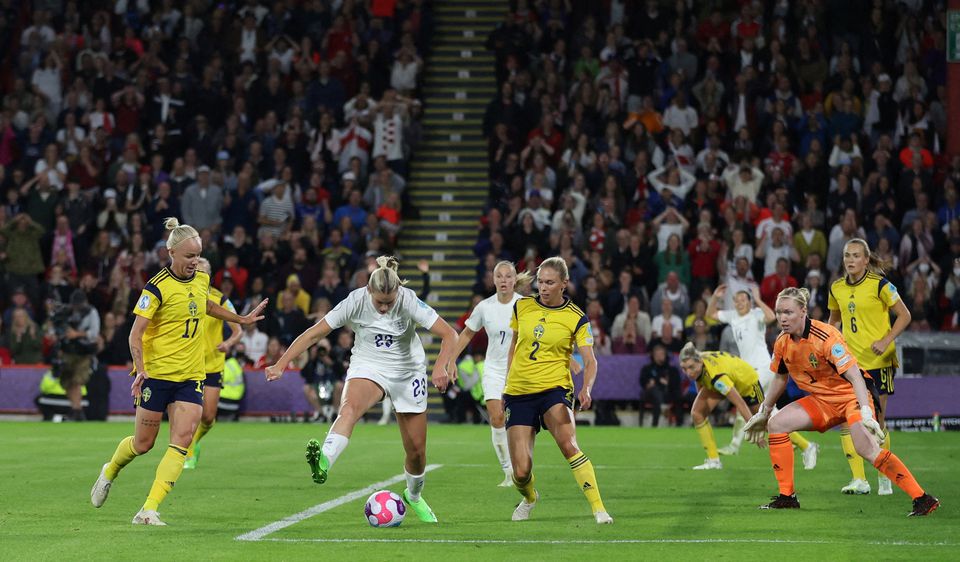 Sheffield: Hosts England waltzed past Sweden into the Women’s Euro 2022 final with Beth Mead, Lucy Bronze, Alessia Russo and Fran Kirby all on target in a sensational 4-0 win in front of a frenzied sell-out crowd at Bramall Lane on Tuesday.

The Lionesses made a nervy start but once Mead produced a moment of brilliance to fire them ahead in the 34th minute it was one-way traffic for Sarina Wiegman’s side who became the first England women’s team to reach a major final since 2009.

England have now won 11 consecutive matches and will face either Germany or France, who meet on Wednesday, in a Wembley showdown on Sunday as they bid to win their first major trophy.

Sweden, the second-ranked team in the world, had three big chances to take the lead early on and were denied by the woodwork and they paid a heavy price.

Mead produced a great turn on the edge of the area to power a shot beyond goalkeeper Hedvig Lindahl to give England a halftime lead that was barely deserved.

But they turned on the style in the second half to crank up a party atmosphere inside the stadium.

Bronze headed England’s second in the 48th minute from a corner and Lauren Hemp somehow failed to make it 3-0 when she fired against the crossbar from substitute Russo’s low cross.

Russo then produced an outstanding piece of improvisation to take the game away from Sweden, sending a cheeky back heel through the legs of goalkeeper Lindahl.

Kirby then put the icing on the cake with a flighted effort that Lindahl could only help into the back of the net.

After that it was exhibition stuff for a rampant England side who will now take some stopping in Sunday’s final, especially with Mead in such scintillating form.

The Arsenal forward is the leading scorer at the tournament with six goals and two assists in five games so far.

“I think at the full time whistle we didn’t really know what to do,” Mead said as the adopted British sporting anthem “Sweet Caroline” echoed around the Yorkshire arena.

“It was an unbelievable atmosphere and we are excited to be in the final. The goal came at a good time because there was pressure on us and they had a few chances.”

It was a chastening evening for Sweden who had looked the more likely side early on.

There was less than a minute on the clock when Sofia Jakobsson got in behind England’s defence and forced a fine save from Mary Earps who denied Jakobsson again soon after.

Stina Blackstenius also headed against the bar but Sweden’s night was soon to disintegrate as England rode the wave of euphoria that has built throughout the tournament.

Ronaldo arrives at Manchester United’s training base, set for talks