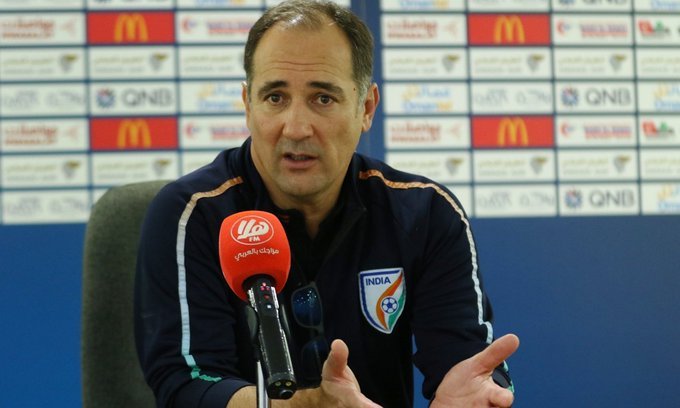 New Delhi: There are some interesting similarities between Igor Stimac and Roberto Mancini. Both are past the age of 50; played the game with distinction before switching over to coaching. Both are well-known for inducting younger footballers in the squad.

Yet, at the end of FIFA international dates in November, Stimac and Mancini have little in common. The Italian has done wonders. In the last few months, he has used two dozen debutants to firmly arrest Italy’s sliding scale in internationals.

Stimac, on the other hand, has proved to be a struggler. Till date, at least. Having appointed the India coach in May this year, the Croatian has a single victory under his belt. And some embarrassing results against lowly-ranked teams.

This is no attempt to draw a parallel between Italy and India. Far from it. That would be utterly ridiculous. India, by all means, is a nation of soccer confusion. Italy have glorious tradition and a classic system. There lies the difference.

In India, the structure has been the same for years. Recruit a foreign coach with all the necessary fanfare. Pay him a decent salary. Describe him as the perfect architect of a true game-changer. Once the euphoria dies down, expect him to fit into the existing system, or in the sheer lack of it.

Stimac is the latest victim. Mancini picked up his players from unexpected quarters. Even from Serie B, the second division of Italian league. Stimac never had a chance to watch a league match in India in the first four months of his stay. He had to depend on the app that highlighted last season’s performance.

Lack of match-time and somewhat absence of nail-biting, passionate competition in top-tier club football is currently India’s biggest problem. To add to it is lack of preparations.

In the last one month, India have lost a golden opportunity to advance in World Cup qualifiers. Hardly ever India would find themselves in a five-team group that has far lower ranked teams like Bangladesh and Afghanistan.

Qatar have already qualified as hosts. Oman are certainly a superior side but have no extraordinary quality. Definitely manageable.

Pity Stimac did not get enough time to prepare. Especially before two key away games. A slight better plan of things could have easily made a world of difference. But no point complaining. The FIFA regulation manual says it all.

Luck was not with India, too. They were hit by too many injuries. Players like Anwar Ali, Amarjit Singh, Rowllin Borges and Sandesh Jhingan would have made some impact. The biggest loss, however, was the long time exit of striker Jeje Lalpekhlua. Stimac so far has not been able to throw up his replacement.

Jeje’s absence has also put extra pressure on hitman Sunil Chhetri. Manvir Singh is still not of the class; Balwant Singh has not found favour with the coach. With the midfield not exactly at its best, lack of creative moves remains the key issue.

Stimac’s attempts to play Mandar Rao Desai or Ashique Kuruniyan as wing-backs has raised eyebrows. But he is not the first foreign coach to do so.

One remembers how Carlton Chapman was introduced as a wing-back by Rustam Akramov or Jo Paul Ancheri was used in an unusual position in a three-back system by Islam Ahmedov.

Both efforts ended in disaster. Foreign coaches are not always right. How can one justify Akramov’s move to include Tausif Jamal and Kuljit Singh ahead of IM Vijayan in 1995!

The loss of points against Bangladesh and Afghanistan is simply inexcusable. No matter what the temperature was. What the turf was. Or how many days of preparations the team had.

Yet, all said and done, Stimac has to be given time and options. Time not to watch fancy league matches from the VIP box. But real quality time for rigorous training on the pitch. Time to implement his ideas. Time to sharpen rough edges.

Option to watch live competitive matches and pick his boys from a wide range of choices. Without the national team doing well, the much-publicised roadmap could prove to be a neatly documented faux pas.