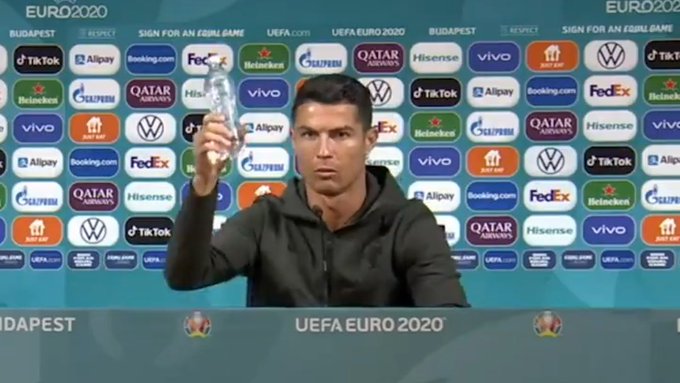 Bucharest: Coca-Cola has said that “everyone is entitled to their drink preferences” after football star Cristiano Ronaldo removed two of the company’s soft drink bottles from his press conference.

The incident happened during Ronaldo’s press conference on Monday.

At the pre-match press conference for UEFA Euro 2020, the Portuguese star wasn’t pleased with the fact that two Coca-Cola bottles were kept in front of him.

He moved the bottles out of the camera view during and encouraged people to drink water instead. This gesture took $4 billion from Coca-Cola’s market value and its shares dropped 1.6 per cent.

Later, in a statement, a Coca-Cola spokesperson said, “Players are offered water, alongside Coca-Cola and Coca-Cola Zero Sugar, on arrival at our press conferences.” The spokesperson added that people have different “tastes and needs”.

Do NOT put Coca Cola in front of Cristiano Ronaldo 😠

This is absolutely brilliant 🤣 pic.twitter.com/bw9FYlTOI4

Coca-Cola is one of the official sponsors of Euro 2020.

On Tuesday, France midfielder Paul Pogba removed a bottle of Heineken beer that had been placed in front of him at a Euro 2020 news conference. Pogba, a practising Muslim, removed the bottle when he sat down to speak to the media after he was named ‘Man of the Match’ in France’s 1-0 Group F win over Germany.