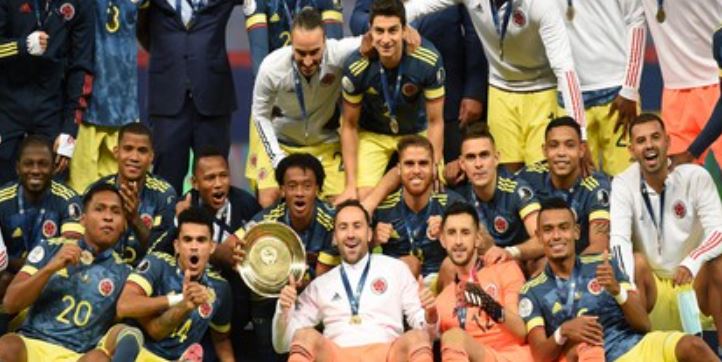 Brasilia: Colombia beat Peru 3-2 on Friday in the third-place match at Copa America after striker Luis Diaz scored a pair of goals, one of them assisted by goalkeeper Camilo Vargas.

The final of the tournament between defending champion Brazil and Argentina will be played Saturday night at the Maracana Stadium in Rio de Janeiro.

Peru opened the scoring at the Mane Garrincha Stadium in Brasilia with Yoshimar Yotun in the 28th minute, with an assist from Christian Cueva that allowed him to beat Colombia’s Vargas with a soft lob.

Colombia equalized in the 49th minute after a free kick taken by Juan Guillermo Cuadrado went through the middle of the Peruvian wall and past goalkeeper Pedro Gallese.

Colombia took the lead for the first time in the 66th minute after Vargas kicked the ball above opposite defenders to find Diaz face to face with Peru’s Gallese. The striker calmly hit it with his right foot to make it 2-1.

Italian-Peruvian striker Gianluca Lapadula levelled once again in the 82nd minute with a header after a corner.

Diaz scored again in added time with a shot from outside the box. The ball deflected on a Peru defender and beat Gallese.

How Gareth Southgate transformed England’s and his own image