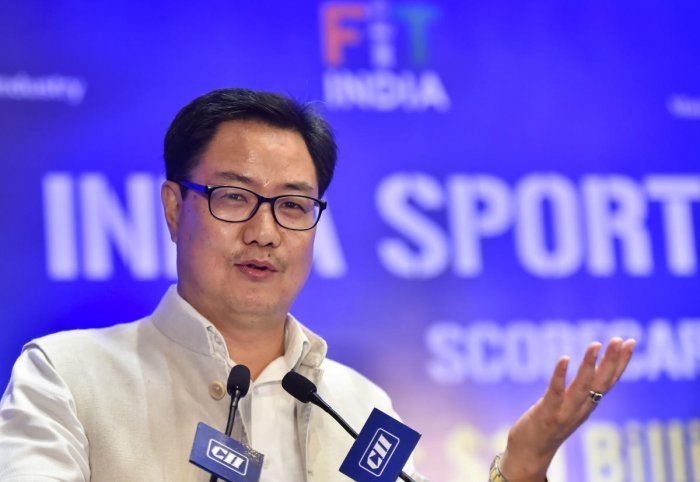 New Delhi: Sports Minister Kiren Rijiju on Sunday said his ministry is devising a plan to ensure a phased resumption of national camps for Olympic-bound athletes by the end of this month but others might have to wait till at least September.

Rijiju said the coronavirus-forced nationwide lockdown, which has been extended till May 17, forced his ministry to delay the resumption of the training camps at Sports Authority of India (SAI) centres. The lockdown was earlier meant to end on May 3.

“The camps will start in a phase-wise manner. First we will start training in NIS Patiala and SAI, Bengaluru where athletes are based currently…by the end of this month training is expected to start in Bengaluru and Patiala,” Rijiju said at FICCI’s webinar titled ‘Corona & Sports: The Champions Speak’.

“The camps will be for those sports which have qualified for Olympics or the sports whose Olympic qualification is in future,” he said

“We will relax things partially looking at the Olympics,” he added.

The national camps were suspended in mid-March when the COVID-19 cases began rising in the country.

The pandemic has killed over 1300 people in India while more than 39,000 have tested positive for the deadly infection. Globally, the death toll has crossed 2 lakh.

The Sports Minister said he wanted a resumption of the national camps on Sunday itself but his hands were tied by the extension of the lockdown, which comes under the National Disaster Management Act.

“I thought of starting training of athletes at SAI centres from May 3 but now we will have to do that in a phased manner by the end of this month because sports events don’t get any relaxation under the Disaster Management Act.

Rijiju, however, made it clear athletes of disciplines, which are not in the reckoning for Olympic qualification, will have to wait for a longer duration to start training.

“We will not allow any national camp beyond Olympic-bound athletes or probables. The resumption of such camps (which are not in reckoning for Olympics) may have to wait till September-October this year,” he said.

The minister also said that fans will have to wait for a while to see sporting activities on the ground till the pandemic is brought under control.

“Let us not expect any competitive match in near future,” Rijiju said.

Rijiju’s comments came close on the heels of Indian Olympic Association President Narinder Batra’s statement on Saturday that he will ask the government to allow national campers undergo outdoor training inside the country’s major sports centres during the lockdown.

The Athletics Federation of India and some athletes at the NIS-Patiala had also written to the Sports Ministry to allow outdoor training.

The Sports Minister said people, including athletes, should expect a lot of changes in their day-to-day life and functioning even after the situation normalises.

“We must accept that things are not going to be as they used to be. We have chalked out certain plans for the future. We are also looking forward to see how India takes up this challenge and emerges as a strong sporting nation post COVID-19,” he said.

“Coronavirus is a reality and it is not going to get over soon and so we will have to live with it,” he added.