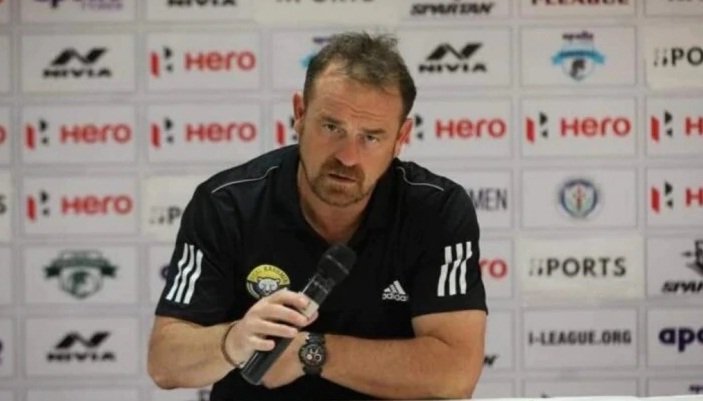 New Delhi: Stranded in Srinagar for more than a month due to the coronavirus-forced national lockdown, Real Kashmir FC head coach David Robertson and his family will finally return to Scotland on Thursday, ending an anxious wait to attend to his sick mother.

Robertson, his wife Kim, son Mason, who plays for the club, and three support staff reached Jammu on Wednesday by an official bus of RKFC which left Srinagar early in the morning. They will fly back home in a British Airways flight from Amritsar on Thursday afternoon.

With his mother undergoing chemotherapy in Aberdeen, Robertson and his family became anxious after international flights were suspended due to the lockdown to contain the COVID-19 pandemic. They have been waiting for the state permit to travel to Amritsar and they got it on Tuesday.

“The British High Commission gave them the permit yesterday and so they left Srinagar at 5am in our club bus which has reached Jammu at 1pm today,” RKFC co-owner Sandeep Chattoo told PTI from Srinagar.

The six of them will take rest for a while at the residence of Chattoo, who hails from Jammu, before proceeding to Amritsar in the evening in the same bus.

“It was my duty to look after them and they were in high spirits throughout as they have been staying in Srinagar for so long. But who does not want to go back home? I am in a way relieved that they will go back home and meet their near and dear ones,” he added.

Under Robertson, Real Kashmir finished fourth this season (22 points from 15 matches). With five matches left to play, the All India Football Federation decided to wind up the I-League early due to the pandemic.

“We have chalked out our plans (for the future) and they will come back to Srinagar whenever the situation allows them,” Chattoo said.

Robertson, Kim, Mason and other foreign recruits have been staying in Chattoo’s hotel in Srinagar ever since the announcement of the lockdown.

Four other foreign players, all from Africa, including skipper Loveday Enyinnaya are still stuck in Chattoo’s hotel.