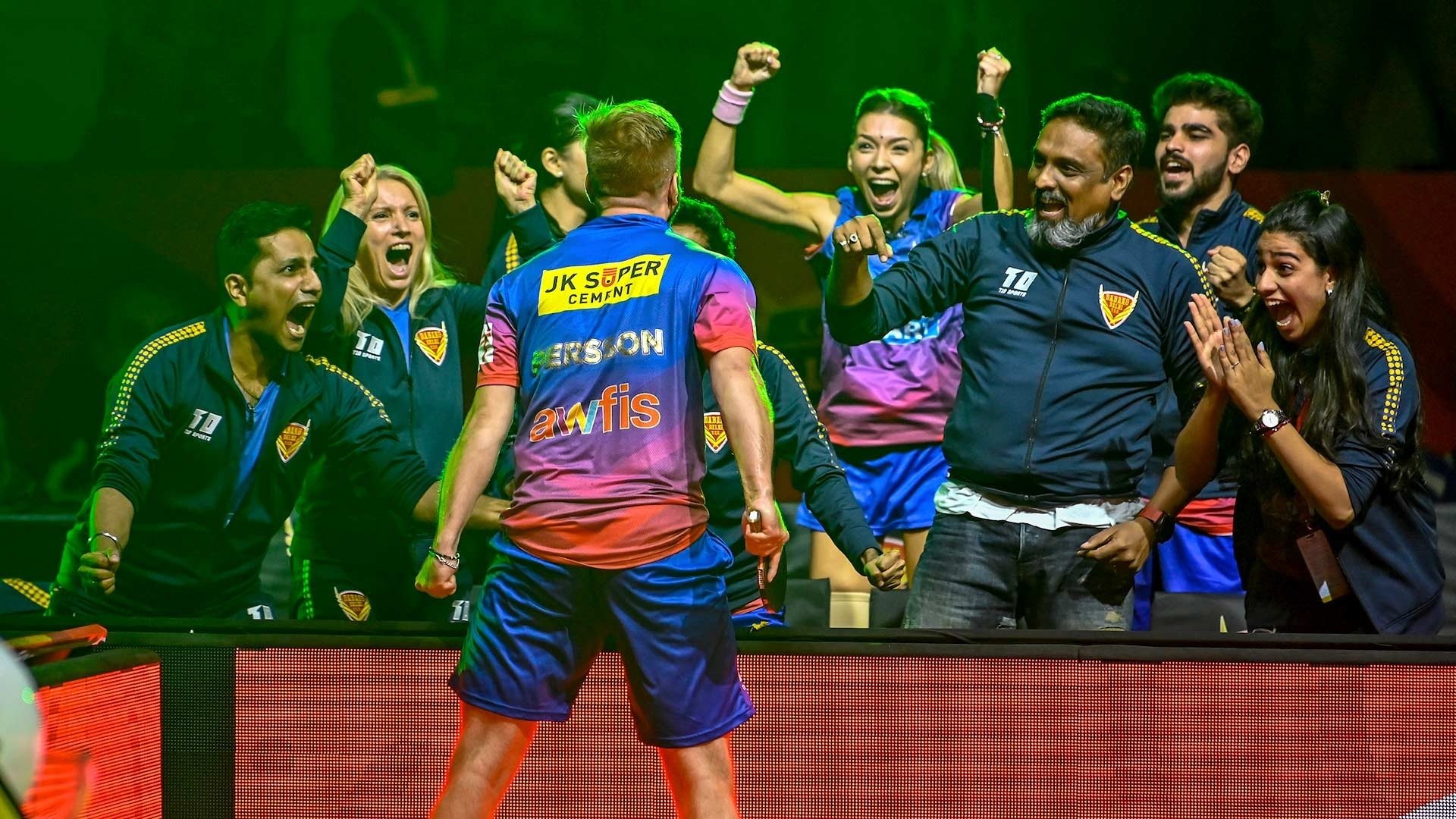 New Delhi: Dabang Delhi TTC registered a thrilling 8-7 victory over U Mumba TT to book a place in the final of the Ultimate Table Tennis here on Friday.

India’s Sathiyan Gnanasekaran and Romania’s Bernadette Szocs set the stage for Dabang, with a grand attacking display. They won their respective singles matches 2-1 before combining to take 2 more points in the mixed doubles.

But Sweden’s Jon Persson unexpectedly lost 1-2 to Manav Thakkar in a fast-paced encounter that brought U Mumba back into the match.

Needing just one point in the last match of the tie, Krittwika Sinha Roy had to calm her nerves and wait for Sutirtha Mukherjee to make mistakes.

Her and Dabang’s moment came in the third and final game, that too at the golden point, to give her side an 8-7 win.

Dabang captain then fought back from a game down to overcome Kazakhstan’s Kirill Gerassimenko, setting the stage for an early finish.

Bernadette was at the top of her game all through, pounding in her forehands to unsettle Doo Hoi in the opening game itself. She raced away to a healthy 6-3 and 7-5 lead before she collected four points to win it.

The second game went on par till 7-7 although Doo Hoi didn’t seem to be moving fluently enough. Bernadette made the most of that to claim this one too.

Doo Hoi showed glimpses of her potent game in the third game, engaging Bernadette in long rallies. She broke away for a 6-1 lead only to see the Romanian gain parity at 7-7. It was Bernadette’s turn to move ahead, even reach match point. Doo Hoi, however, dug in and won the next four to clinch a crucial point for U Mumba.

In the first men’s singles, Sathiyan slipped behind to 3-7 in the first game and surrendered it 6-11. He was in top form in the second though, going 8-3 up. That was enough to give him the second game.

Kirill Gerassimenko kept pace with the Indian in the third till 6-6, but thereafter it was Sathiyan all over again.

Sathiyan and Bernadette came back to down Manav Thakkar and Doo Hoi in the crucial Mixed Doubles. In a thrilling encounter, the two pairs matched each other in intensity and stroke-play.

Manav-Doo Hoi, however, picked up the first point for U Mumba, winning the game 11-9 on a contentious note. That got Sathiyan-Bernadette going and they romped home in the next two to hand the U Mumba pair their first defeat in the Mixed Doubles this season.

In the reverse men’s singles, Sweden’s Persson (World No. 63) failed to live up to his rankings, succumbing to the super-fast Manav Thakkar’s strokeplay. He fell behind 4-7 but clawed back into the contest, making it 10-10. Manav, however, stole the golden point to give U Mumba the first whiff of a chance.

Persson grabbed the lead in the second game, going all the way to 9-7. But Manav took the next 4 points to shift the pressure to Dabang.

The Swede looked down and out as he slipped to 1-6 and then 6-10. But a spectacular burst of shots saw their fortunes reverse and Persson ended up winning the third game.