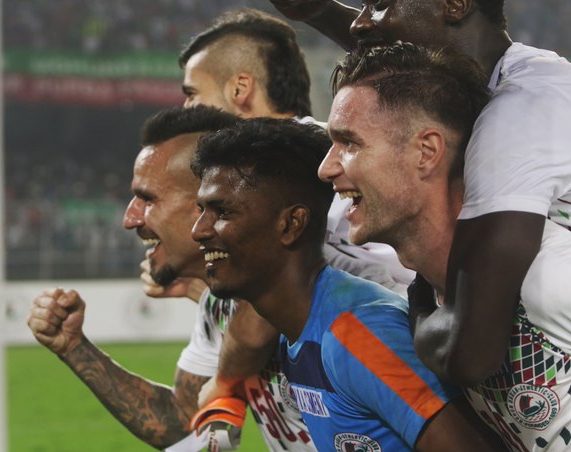 They were simply there to pursue a passion. No smiling face was needed at the VIP box to lift the atmosphere. No film star had to be hired to waive to the crowd. There was no need to put out highly inflated attendance record.

The focus entirely was on till-now Mohun Bagan and East Bengal, who were involved in an intense 90-minute battle on the pitch. It once again made one thing clear.

In terms of passionate fan-following and popularity, the two teams can easily toy with any cash-rich franchise or club in the country. No “roadmap” of Indian football can be penned down without them. Even if it is being written at Nariman Point or Kuala Lumpur.

At the same time, Sunday’s well-contested tie may leave many with a sense of wonder. Both teams and their players were full of gusto. They looked ready for the challenge and eager to fight.

Yet, one club are struggling to find a sponsor for the next season. The other have straightaway decided to hand over the club to a third party on a platter because they were terribly short of money.

The whole scenario does give an uncanny feeling. Are these two clubs being run by a group of people, who keep their own interests ahead of football and their clubs? Then why do they shift their stands every now and then and invariably manage to stay on the right side of power?

The two clubs’ contribution to Indian football will truly remain unmatched for the next 100 years. Sadly, they were involved in too many stories of betrayal, too.

At the start of the franchise league, officials of both clubs were stand-out revolutionaries; Che Guevaras of Indian football. “On our dead bodies”, they roared in unison when approached to play the new league.

Last year, Mohun Bagan and East Bengal led the show in boycotting the Super Cup. They soon turned to trade unionism. The formation of a six-club consortium to fight against All India Football Federation’s (AIFF) “injustice” was their brain child.

True to tradition, they deserted the ship as quickly as they boarded it. The temptation to play the franchise league was hard to resist. No matter it left several other junior clubs stranded.

Their skills to switch sides are now legendary. The same, however, can’t be said about them when it comes to managing the affairs of the club. Money remained a perpetual problem for both the clubs ever since a Bengaluru-based liquor company withdrew its sponsorship.

Officials of one club said (on the eve of its club elections) a series of sponsors were waiting in the wings. They never stepped on the stage. The other did bring in a lucrative party, only to start fighting with them almost immediately.

To cut the long story short, the inevitable has happened. Finally. If one of them has handed over the club to an outsider lock, stock and barrel, it is certainly not to protect the institution. Or Indian football.

It is a move to save their own skin. To hang on to club management by hook or crook. Any further delay would have threatened their existence.

They are not bothered in which league their club is playing. As long as they have their chairs secured in the club tent. The so-called country’s oldest public club did not even bother to call an extraordinary general meeting to get the “merger” decision approved.

May be, it is a blessing in disguise. The new management could be more respectful to its millions of fans. To its much-publicised (and now clichéd) history and tradition. The club could now be run more professionally. Not according to some people’s whims and fancies.

Every cloud has a silver lining.