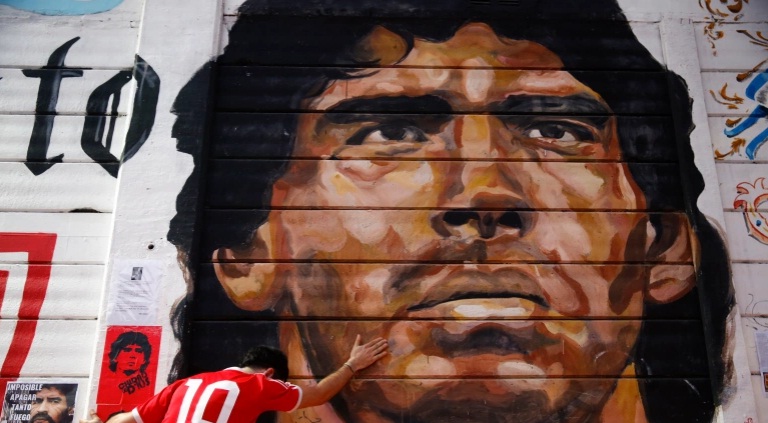 At Maradona’s childhood home in Villa Fiorito, a largely impoverished city in the suburbs of the capital, people gathered to pray in front of an Argentine flag adorned with a black ribbon.

Next to Maradona’s former club, Boca Juniors, in the gritty Buenos Aires neighborhood of Boca, they laid bouquets of flowers.

“I came because I felt him. He’s from here, from us,” said Juan Jose Quinteros, 50, a Boca supporter who came to mourn Maradona outside the club.

“With that hand of God he gave the soul back to the people,” Quinteros said, a reference to a goal Maradona scored with his hand against England in the 1986 World Cup in Mexico.

Argentinians were plunged into grief by the death of the country’s favourite son, a sublimely gifted sporting hero they saw as “the most human of gods”.

The news fell like a hammer blow to a nation beaten down by months of economic crisis and the coronavirus pandemic, but one where football is seen as a panacea for all ills.

If football is a religion in Argentina, then Maradona really was its god – especially for the founders of the Maradonian Church, a mostly internet-based group that uses religious language to venerate the player.

Approximately 1,000 people answered the “church’s” call for fans to gather in his honour at the Obelisk at 6pm local time, a traditional rallying point in central Buenos Aires for football celebrations.

“I prefer not to speak. I’m going to the Obelisk today,” said Guillermo Rodriguez, a lifelong fan who got a tattoo of his idol on October 30 to celebrate Maradona’s 60th birthday.

Fans stood forlornly in homage to the Number 10, showing Maradona in his dashing prime [Martin Villar/Reuters]

Rodriguez, 42, could not hold back his tears, saying he now knew he would never be able to fulfil his dream of hugging his idol.

“I’m totally shocked, grief-stricken,” said Gabriel Oturi, 68. “I’ll be honest with you. I thought he was a great guy who didn’t have very good people around him, who was taken advantage of a lot.”

“The first thing my 12-year-old son said to me was: ‘Mum, Maradona died.’ I couldn’t believe it. And I didn’t adore him particularly, but I felt sorry for him,” said Marcela Rodriguez, 52.

“Few times in my life have I felt the pain that invades me today,” wrote Maurico Passadore on social media, thinking about the famous World Cup tie against England in Mexico in June 1986, when Maradona scored the infamous “Hand of God” goal.

“Few times have I felt as much joy as that June 29, when we touched the sky with our hands, the same sky that today is darkened and fills us with tears.”

Some pointed out that Maradona died on the same date as his hero Fidel Castro, the Cuban revolutionary leader he referred to as his “second father”.

Maradona’s struggles with drugs throughout his career were part of what made Argentinians so protective of their hero.

An anonymous social media user went viral with a message saying Maradona “was a wandering, dirty and sinful god. The most human of gods”.

People light candles to honor Diego Maradona, in Naples, Italy, on Nov. 25, 2020. Diego Maradona has died. He was 60. (Alessandro Garofalo/LaPresse via AP)

If there’s one place outside Argentina that will likely match — or possibly even exceed — the outpouring of mourning for Diego Maradona, it’s in Naples.

While Maradona was revered around the world as perhaps the greatest soccer player ever, in Naples he was more than that.

Maradona was treated as a deity for the way he led Napoli to its only two Serie A titles — in 1987 and 1990 — and raised the spirits of the southern Italian city, which remains far removed both geographically and socio-economically from the country’s soccer capitals of Milan and Turin.

“Maradona wasn’t just a player. He represented the spirit of Napoli for years,” said former Napoli president Corrado Ferlaino, who owned the club when Maradona played there.

A banner with a painted image of Argentine soccer legend Diego Maradona is displayed as people gather to mourn his death outside San Paolo stadium in Naples, Italy November 25, 2020. REUTERS/Yara Nardi

Maradona’s spokesman, Sebastian Sanchi, said he died Wednesday of a heart attack at the age of 60, two weeks after being released from a hospital in Buenos Aires following brain surgery.

Upon hearing the news, thousands of Neapolitans poured out into the city’s streets to honor Maradona and light candles in his memory. Many of them stood below huge murals of their hero that cover entire sides of downtown buildings.

Naples Mayor Luigi De Magistris immediately proposed that the city’s San Paolo Stadium be renamed for Maradona — and ordered the stadium’s lights be turned on all night even though there was no game being played there.

“Maradona is Napoli. The passion for him here is known to everyone,” De Magistris said. “Maradona united Neapolitans all over the world — as well as fans of other squads.