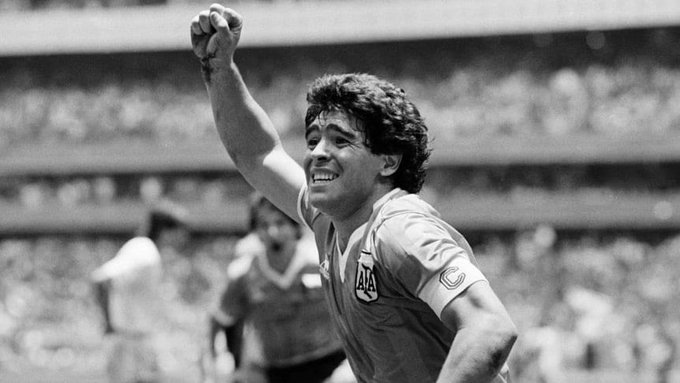 Kolkata: A shockwave rippled through the neighbourhoods of Kolkata, known to be the Mecca of Indian football, following the demise of legendary footballer Diego Armando Maradona.

Maradona, who led Argentina to victory at the 1986 FIFA World Cup and was widely regarded as one of the greatest footballers of all time, died on Wednesday due to cardio-respiratory arrest at his home in the Tigre district on the northern outskirts of Buenos Aires.

Following his death, people in Kolkata turned nostalgic by sharing pictures of Maradona during his visit to the West Bengal capital in 2008 and 2017 to participate in a charity football match.

“I remember when we had met him at his residence in Argentina. Three of us went to meet inviting him to Kolkata. We were waiting for him in a room. He gave us only five minutes time. He entered the hall in a t-shirt and shorts and welcomed us with open arms. He hugged all three of us in such a way that we are like his old acquaintances. We never realised that we were meeting the football legend for the first time,” said West Bengal Communist Party of India-Marxist (CPI-M) leader Samik Lahiri.

Lahiri said while taking Maradona to Kolkata, he had told the maverick footballer about deceased communist icon Jyoti Basu and the Argentinean had expressed keen interest to meet him.

“I remember I had told him that we also had a communist legend Jyoti Basu and he is like Fidel Castro for us. He immediately expressed interest to meet Basu. The time slot was only for 10 minutes for the meeting. But the meeting extended for an hour. He was that simple and innocent human being,” said the communist leader, as he remembered the football magician.

The members of the football fraternity in the state capital also remembered how almost the entire city erupted in celebrations to welcome Maradona both times in the past.

“My hero no more…my mad genius rest in peace. I watched football for you,” former skipper of the Indian cricket team and current Board of Control for Cricket in India (BCCI) President Sourav Ganguly tweeted alongwith a memory of him when Maradona had visited Kolkata for the second time in December 2017.

“The man has left us. His magic, madness and legend never will,” tweeted Sunil Chhetri.

Maradona was particularly well-known for the two goals he scored against England in the 1986 World Cup quarter-final. One was later voted “Goal of the Century”, while the other is generally referred to as the “Hand of God”, a reference to the fact that the goal should have been disallowed for handball.