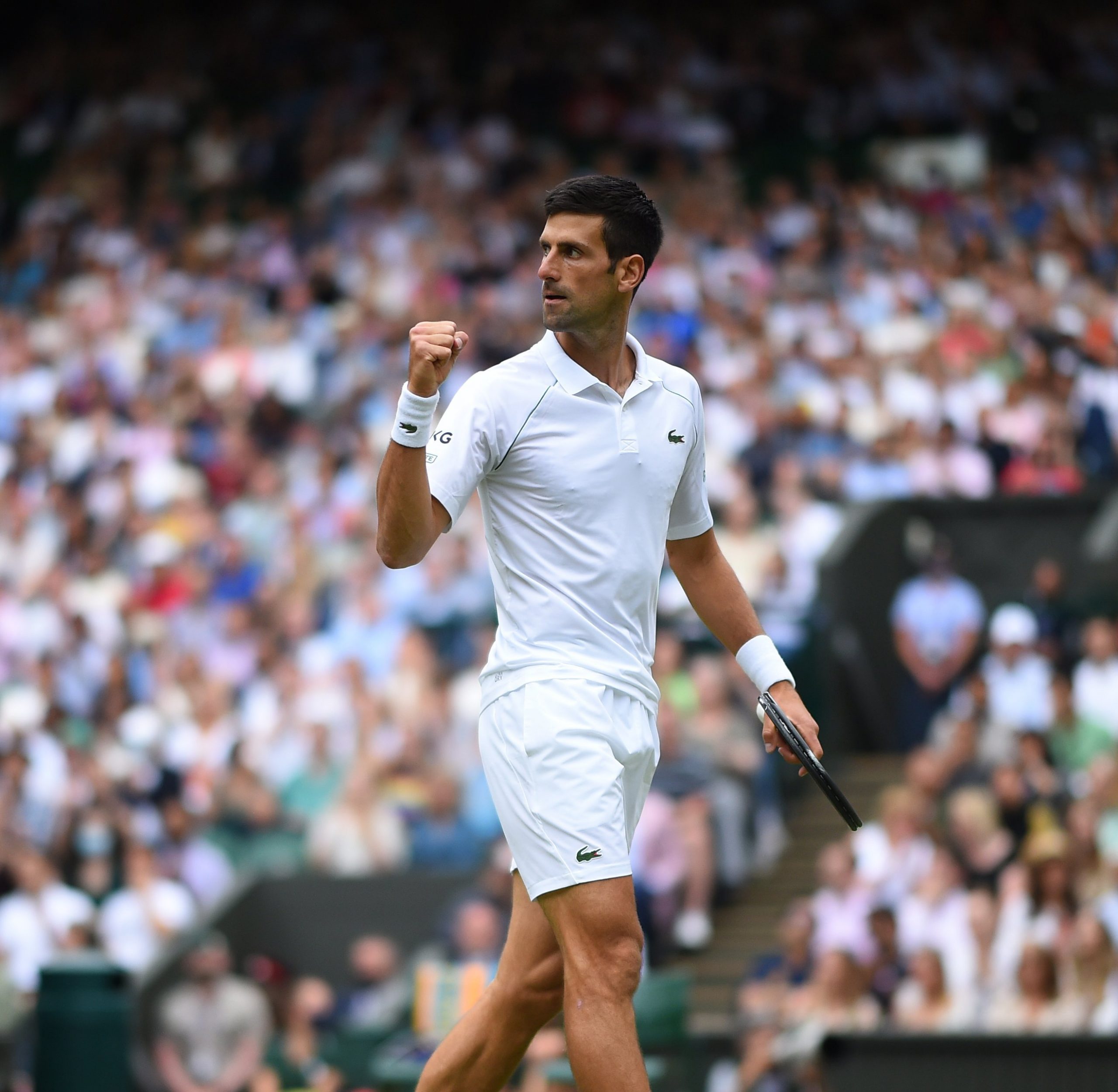 Wimbledon: Defending champion Novak Djokovic absorbed a barrage of powerful hitting from Canadian Denis Shapovalov to reach his seventh Wimbledon final on Friday with a 7-6(3) 7-5 7-5 victory that kept the indefatigable Serb on course to write history.

The 34-year-old was eclipsed at times by a 22-year-old opponent who lit up an overcast Centre Court.

But as he almost always does, he responded to adversity with his usual mix of dogged defence and clinical precision to set up a Sunday showdown with Italian Matteo Berrettini.

Tenth seed Shapovalov was bidding to become only the second Canadian man to reach the Wimbledon final and despite producing some scintillating tennis, was left pondering what might have been after failing to crack the toughest nut in the business.

He struck 40 winners but whenever Djokovic found himself in peril, he manned the barricades, saving 10 of the 11 break points he faced and making only 15 unforced errors as he simply refused to be knocked off course in his steely pursuit of equalling Roger Federer and Rafa Nadal’s men’s record haul of 20 Grand Slam titles.

Djokovic won the opening set despite Shapovalov serving for it at 5-4, then saved several break points in the second as his opponent threw the kitchen sink at the five-time champion.

Even in the third set Shapovalov continued shooting from the hip but eventually his fire blew out as Djokovic claimed one of the toughest straight sets wins of his Wimbledon career.

Shapovalov left the court with tears in his eyes but he showed enough in a marvellous run to suggest that he is ready to challenge for the biggest prizes in tennis.

Djokovic has now won 18 successive sets since losing the opener in his first round match against British wildcard Jack Draper and extended his winning run at Wimbledon to 20, having last tasted defeat in the 2017 quarter-finals.

But he knew he had been in a real scrap.

“I don’t think the scoreline says enough about the performance or the match,” Djokovic said on court.

“He was serving for the first set and was probably the better player in the second set as well, had many chances. We are going to see a lot of him in the future, he is a great player.”

Djokovic is now one win away for a third successive Wimbledon title, but there is an even bigger incentive that his fuelling the Serb’s insatiable appetite for victory.

Beat seventh seed Berrettini on Sunday and he will go to next month’s U.S. Open with a number of records looming — a 21st Grand Slam title and possibly a Golden Slam if, in the interim period, he wins the Olympic singles.

“Every time I hear there is something on the line that is historic it inspires me but at the same time I have to balance it and win only the next match,” Djokovic said.

For the vast majority the match there was little telling which player was making his first appearance in a Grand Slam semi-final and which one was contesting his 41st.

Left-hander Shapovalov had vowed to unleash his naturally attacking game on Djokovic in a bid to claim a first win against the Serb in seven meetings. He was as good as his word.

Ripping backhands and forehands on to the lines, he dominated the first set after breaking in the third game and served for the opening set at 5-4. It felt like a big moment if he was to stand a chance, but sadly the killer instinct that serial Grand Slam winners have is not quite there.

Some loose groundstrokes allowed Djokovic to level and the top seed took control of the tiebreak after a winning a ferocious baseline rally at 4-2.

Shapovalov ended the set with a double-fault.

Undaunted, Shapovalov continued to stretch Djokovic in the second set and had him in trouble on serve at 1-2 but failed to break despite leading 0-40.

Two games later Shapovalov had 15-40 on the Djokovic serve but again the Serb showed Houdini-like skills to extricate himself from yet another hole.

When Shapovalov double-faulted to drop his serve at 5-5, Djokovic duly held with relish to open a two-set lead.

From then on a 30th Grand Slam final appearance for Djokovic was inevitable.

Wimbledon 2021: Ash Barty to face Karolina Pliskova in her first final in London