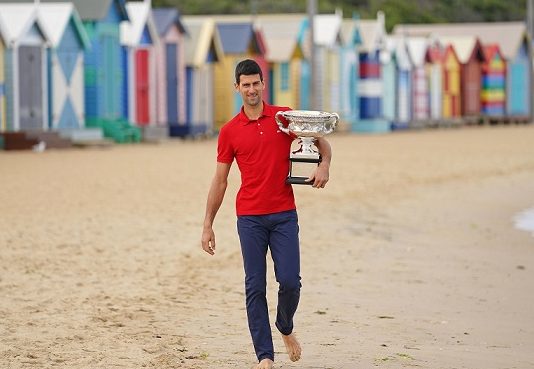 Melbourne: Tennis world No.1 Novak Djokovic could be set for a period on the sidelines after his ninth Australian Open win due to a tear in his abdominal muscle he suffered during the tournament. After the final against Daniil Medvedev, Djokovic revealed the nature of the injury that he had suffered during a third round match in Melbourne.

“I just came actually came from another MRI that I’ve done this morning and the damage is bigger than what it was when it happened when I did the first MRI after the third round,” Djokovic told reporters.

“It’s not too bad judging by what the doctor said but I’ll have to take some time off and heal. The tear is bigger.”

Djokovic, 33, played through the pain in his third round match against USA’s Taylor Fritz and said that he was not sure if he could play until two hours before his next match. He, however, went through with it and ended up winning the tournament, thus sealing his 18th Grand Slam victory.

“I was quite worried. It did not look realistic that I could actually play until two hours before the fourth round match. That’s when I stepped on the court and played for the first time since the third round and it looked ok. The pain felt bearable and I just accepted the fact that I would have to play through it,” he said.

The Serb said that he decided to take the risk of doing more damage to the injury only because he was playing in a Grand Slam. “We always play with a pain in professional sports but this was a different kind of pain that came from an injury instead of soreness or fatigue. I was aware I was risking more damage by playing. If there were any tournaments where I would take that risk, it would be here or any Grand Slam. The medical team and physio did tremendous work,” he said.

Djokovic also indicated that he will be playing in fewer tournaments so as to spend more time with his family who can’t travel with him to all tournaments any more because of Covid-19 protocols.

“My goals will adapt and shift a little. I will an opportunity to adjust my calendar which I as a father and husband am really looking forward to doing. Judging by what we are seeing around the world, having family on the road with me will be very difficult. We have rules in place that don’t allow too many people to travel with you. I’ll have to wait and see how the schedule looks like, I haven’t made any commitments after Australia,” he said.

Djokovic is also set to surpass Roger Federer’s record for 310 weeks at the top of the ATP rankings, while closing in on Federer and Nadal’s record of 20 Grand Slam wins.

“I have to be smarter with my schedule and peak at the right time. The Slams are the tournaments where I want to be able to perform at my best and now after achieving the historic No.1 (record) it is going to be a relief because I am going to focus all my attention on Slams mostly. When you are going for No.1 ranking you have to be playing the entire season and playing well,” he said.