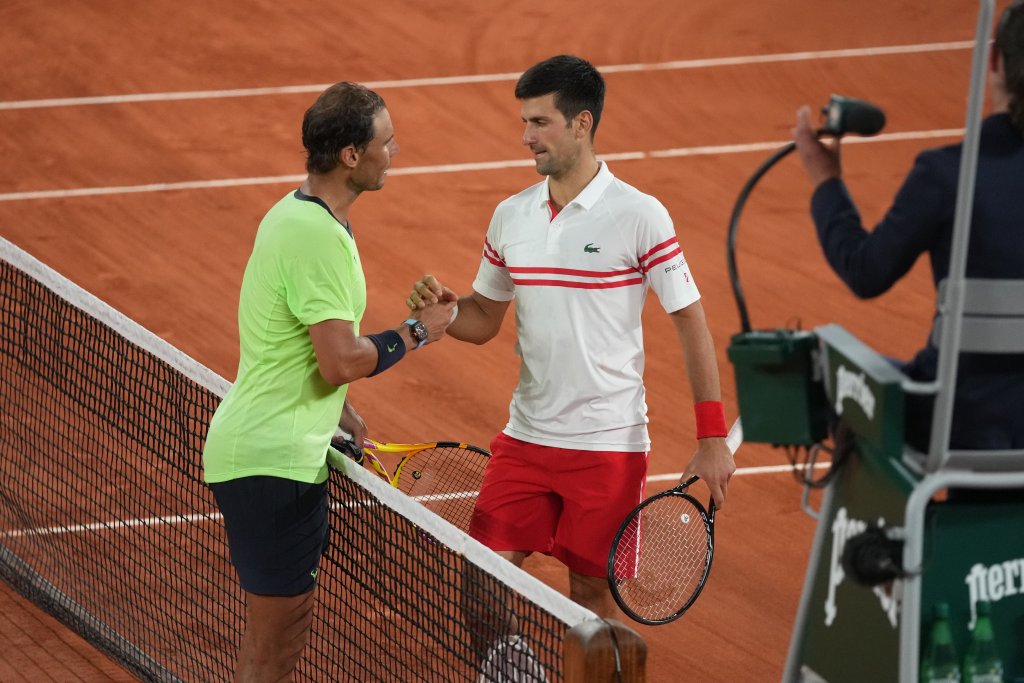 Paris: Novak Djokovic came from a set down in a spellbinding French Open semi-final to inflict only a third ever defeat on the Parisian clay for Rafa Nadal, moving through 3-6 6-3 7-6(4) 6-2 in front of mesmerised crowd on Friday.

The two warriors produced superhuman tennis as the 58th duel between them arguably rivalled anything they had conjured against each other since they first locked horns in 2006.

Nadal, bidding for a record-extending 14th French Open title, won the first five games and looked on course to repeat his drubbing of the Serb in last year’s final.

But there was no reprieve for the 35-year-old Nadal as his seemingly inexhaustible resolve was finally broken.

He hung on like the champion he is but Djokovic, looking fresh despite slugging it out for four hours with the world’s greatest ever claycourter, ruthlessly closed in.

After breaking a tiring Nadal’s serve for a 4-2 lead in the fourth set, the end came quickly as the Serb inflicted a first defeat on Nadal at the French Open since he beat him in the 2015 quarter-final.

Nadal’s record at Roland Garros since winning the title on his debut in 2005 now stands at 105-3.

Djokovic will play Greece’s Stefanos Tsitsipas in Sunday’s final with the chance to not only add to his 2016 French Open title but also move to 19 Grand Slam titles, just one behind the men’s record 20 held by Nadal and Roger Federer.

Djokovic now leads his series with Nadal 30-28 but this win was perhaps the sweetest. While in 2015 his straight sets win was asterisked by the fact Nadal was struggling to recover from injuries, this time both players were at their best.

His celebrations were low-key, however, such is the respect he holds for Nadal.

“First I want to say it is a privilege to be on this court with Rafael Nadal,” Djokovic said on court.

“The biggest match I have ever played here in Paris. Also the best match with the best atmosphere for both players.

“To win against Rafa on this court you have to play your best tennis, and tonight I played my best tennis.”

Nadal, whose only other defeat apart from the one to Djokovic came against Swede Robin Soderling in 2009 when he was suffering knee issues, was typically gracious in defeat.

“Well done for him. It was a good fight out there. I tried my best, and today was not my day,” Nadal told reporters.

Any doubt that the duo’s 17th meeting in a Grand Slam would live up to pre-match hype was erased during a sensational opening game which saw Nadal save break points before holding serve after eight electrifying minutes.

The Spaniard then went 5-0 ahead and Djokovic’s fans might have been excused for covering their eyes as the memory of last year’s final in which Nadal won the first set 6-0 flooded back.

Djokovic did not flinch, clawing back three games before Nadal took an hour-long opener on his sixth set point.

Though trailing, the 34-year-old Djokovic had established a foothold in the red dirt and shifted the momentum, breaking serve twice to take the second set.

Unbelievably, the ferocity of the tennis increased in the third set as the players wrestled for control in rally after brilliant rally.

Djokovic began to turn the screws and jogged to his chair after breaking serve at 2-2 when Nadal netted a dropshot.

It was the first time Djokovic had been in front but Nadal hit back immediately to break back with a forehand winner only to drop serve again as Djokovic moved 5-3 ahead.

With chants of “Rafa, Rafa” and “Nole, Nole” filling the night air, the match took another twist as Nadal found another gear to hit back and lead 6-5 and create a set point which Djokovic saved with am outrageous dropshot.

In the tiebreak Nadal double-faulted then had his head in his hands after fluffing a volley to hand Djokovic a 5-3 lead. Djokovic banged down an ace and duly took the set.

With the crowd allowed to stay, Nadal was re-energised at the start of the fourth, taking a 2-0 lead, but Djokovic clicked into gear and reeled off the final six games.