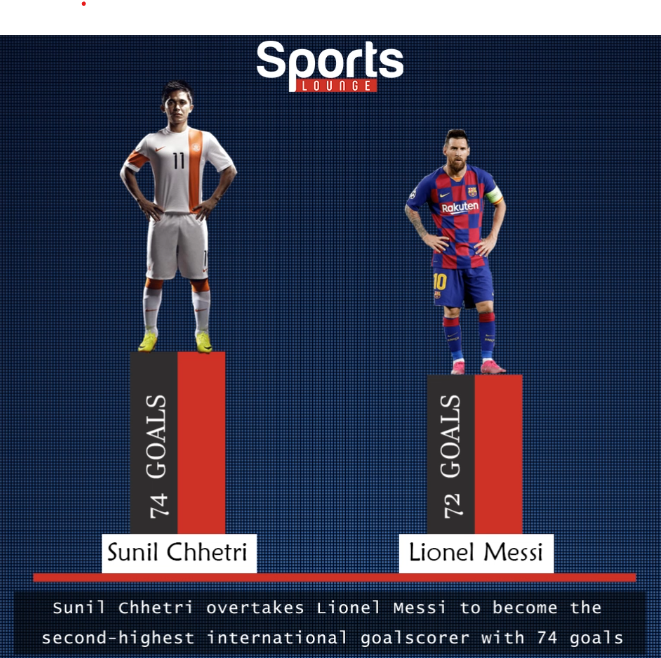 Chhetri added another feather to his illustrious cap as he overtook Messi to become the second-highest active international goalscorer on Monday.

🤩 He’s now got more than Messi! Sunil Chhetri’s double earns the Blue Tigers a 2-0 win in #WCQ and moves him on to 74 international goals – above Lionel Messi and one off entering world football’s all-time top 10 🧗‍♂️@chetrisunil11 | @IndianFootball pic.twitter.com/sCCd6BgS9H

Chhetri achieved the feat when he struck a brace to help India defeat Bangladesh 2-0 in the ongoing FIFA World Cup Qatar 2022, and AFC Asian Cup China Qualifiers at the Jassim Bin Hamad Stadium at Al Sadd Club in Doha.

The 36-year-old Chhetri scored both his goals in the second half of the match to hand India a thrilling win.

“You know, I don’t (on being asked is he counting on a number of goals). Once I’m done in ten years we will talk about all my goals,” Chhetri said after the match in a video posted on Twitter from The Indian football team’s handle.

Chhetri has now scored 74 goals, two more than Messi, and is only behind Portugal star Cristiano Ronaldo (103) in the list of active footballers with the most international goals.

How do you rate that effort from the #BlueTigers on both ends of the field?#BANIND ⚔️ #WCQ 🏆 #BackTheBlue 💙 #IndianFootball ⚽ pic.twitter.com/RsemCez8qg