'Don't know how to describe this': Proud of team's determination, says Rahane 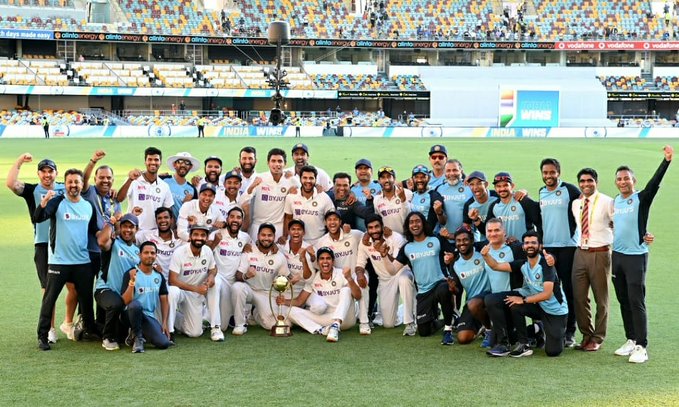 Brisbane: Extremely jubilant with team’s emphatic win in Brisbane, stand-in India skipper Ajinkya Rahane on Tuesday heaped praise on the individuals within the team for the character that they showed during the course of the four-match series against Australia.

India registered a historic three-wicket win in the fourth and final Test against Australia at The Gabba, thereby clinching the Border-Gavaskar series 2-1.

Shubman Gill (91), Rishabh Pant (89*) and Cheteshwar Pujara (56) all played brilliant innings as India chased down the mammoth 328-run target on the final day of the Test match, thus breaching Australia’s fortress in Brisbane.

The hosts had won the first Test of the series in Adelaide, while bowling out India with the pink ball for their lowest Test total of 36. The Rahane-led side, however, registered a stunning comeback in Melbourne, winning the Boxing Day Test by eight wickets. The third Test then ended in an epic draw in Sydney.

“It means a lot to us. I don’t know how to describe this, but our boys showed a lot of character and determination after the Adelaide Test,” Rahane said at the post-match presentation.

“I’m really proud of each and every individual,” he added.

Siraj, in the final Test, registered his maiden five-wicket haul and ended as India’s leading wicket-taker in the series with 13 scalps.

Sundar had an incredible debut as he scalped four wickets and scored 84 runs throughout the course of the match. Thakur, playing just his second Test match, picked seven wickets and scored 69 runs. The trio played a significant role in India’s historic win at The Gabba.

“Taking 20 wickets was the key, so we opted for five bowlers. Sundar brought the balance in place of (Ravindra) Jadeja,” said Rahane while revealing that the team always wanted to play with five bowlers.

“The intention was clear to play five bowlers. Siraj played two Tests, (Navdeep) Saini just one, so it was inexperienced but the character shown by the bowlers and everyone else was incredible,” he added.