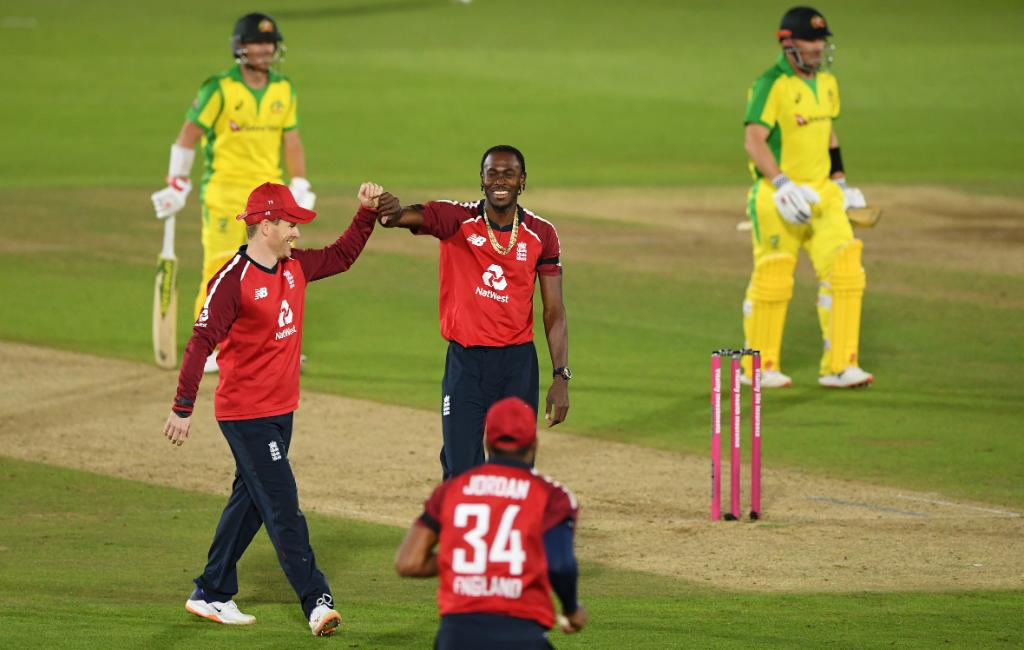 New Delhi: A late fightback from the bowlers helped England beat Australia by two runs in the first T20I of the three-match series at the Ageas Bowl.

Chasing 163, Australia at one stage needed just 39 runs from the last six overs with nine wickets in hand to take a 1-0 lead in the series on Friday. However, they ended up on 160/6 and lost the game which was in their grasp for the majority of the duration.

Earlier, Australia restricted England to 162/7, despite Jos Buttler’s early fireworks and Dawid Malan’s well-composed 66. For the visitors, it was Kane Richardson and Glenn Maxwell who provided control as they returned with figures of 2/13 and 2/14 respectively from three overs apiece.

Left-arm spinner Aston Agar, who was taken for 16 by Buttler in his first over, also bounced back and returned with figures of 2/32 in his four overs.

Other than Buttler and Malan, only Chris Jordan got to double figures, hitting 14* from 8 balls in a late cameo.

Australia had a great start to their chase and looked on track to register a comprehensive victory, thanks to Aaron Finch and David Warner’s early dominance, with the pair adding 98 runs in 11 overs before the Australia captain lost his wicket after scoring 46 runs.

Steve Smith, who came in next, looked fluent as he scored 18 from 11 balls, but Adil Rashid had him caught sweeping and he then dismissed Maxwell four balls later as England fought back.

Warner (58) and Alex Carey also went back to the pavilion in quick succession as Australia lost four wickets for nine runs, with the visitors still needing 30 from 21 balls.

Australia needed 15 from the final over but Tom Curran kept his cool and didn’t allow Marcus Stoinis to take his team across the line.

The two teams will now lock horns in the second T20I at the same venue on Sunday.

Six days of quarantine in UAE was more difficult than 4 months at home: Shami