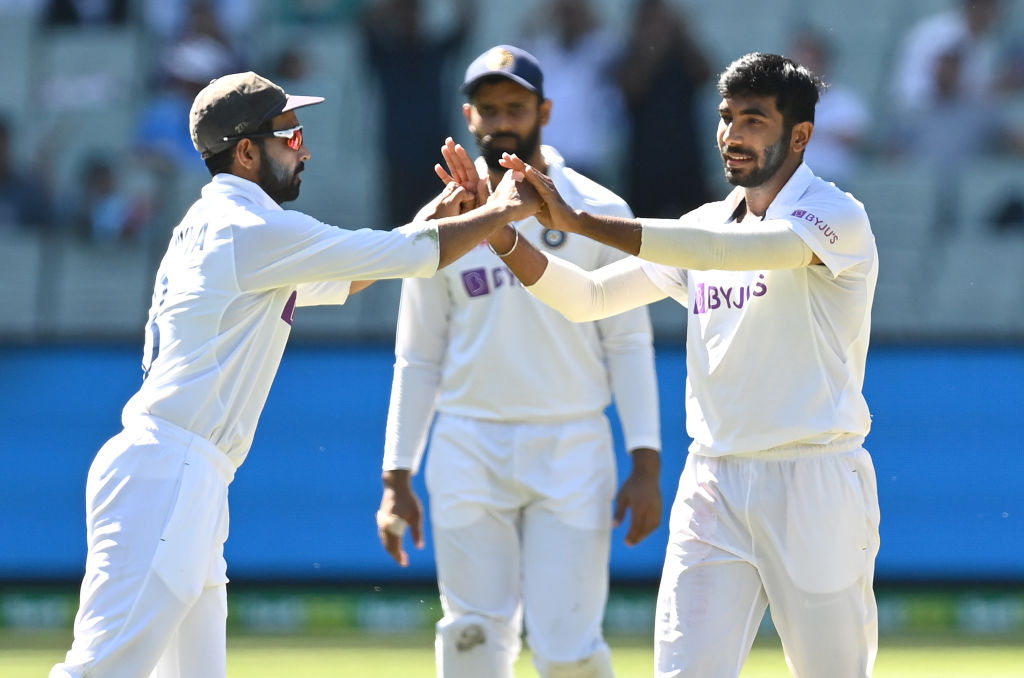 New Delhi: India’s Jasprit Bumrah took four wickets as England suffered their latest batting collapse in slumping to 183 all out on the opening day of the first Test at Trent Bridge on Wednesday.

Bumrah, who struck with the fifth ball of the match to remove Rory Burns for one of four ducks in the innings, took 4/46 in 20.4 overs, with fellow paceman Mohammed Shami also impressing with 3/28 in 17 overs.

England captain Joe Root, who won the toss, top-scored with 64 and was the only batsman to pass 30, with Yorkshire team-mate Jonny Bairstow making 29 on his Test return.

Bairstow’s exit on the stroke of tea sparked a slump that saw England lose six wickets for 22 runs.

England’s 138/3 was transformed into 160/9 against an attack without Ishant Sharma and off-spinner Ravichandran Ashwin, both dropped following India’s loss to New Zealand in the inaugural World Test Championship final at Southampton in June.

India then denied England a breakthrough to be 21/0 at stumps, with both Rohit Sharma and KL Rahul – only drafted in after Mayank Agwaral suffered a suspected concussion while batting in the nets on Monday – nine not out.

Remarkably, this was a first red-ball innings this season for both Bairstow and Jos Buttler, out for nought, with both batsmen not helped by the fixture schedule.

In June, England suffered a humiliating eight-wicket loss to New Zealand at Edgbaston that condemned them to a first home series loss in seven years, prompting former captain Alastair Cook to say the current top order “can’t handle” the pressure of Test cricket.

Many of the same batsmen struggled again on Wednesday.

Ben Stokes, who missed the New Zealand series with a finger injury, delivered a blow to England’s hopes ahead of this five-match series when it was announced Friday the star all-rounder was taking an indefinite break from cricket to “prioritise his mental health”.

But his absence was not the reason for England’s top-order woes.

Root’s decision to bat first after winning the toss on a green-tinged pitch that promised to aid India’s four-man pace attack was a bold decision given England’s well-known batting frailties.

It took India just five balls to reduce England to none for one, with left-hander Burns lbw on review to a Bumrah delivery that cut back.

New batsman Zak Crawley came to the crease having made just 123 runs in 12 Test innings since a brilliant 267 against Pakistan at Southampton last year.

Crawley had been largely untroubled until, on 27, he was caught behind after what seemed a speculative review by the tourists revealed a thin nick off Mohammed Siraj to Pant – much to the evident relief of India captain Virat Kohli.

But a fourth-wicket stand of 72 ended off what became the last ball before tea when Bairstow was lbw to Shami.