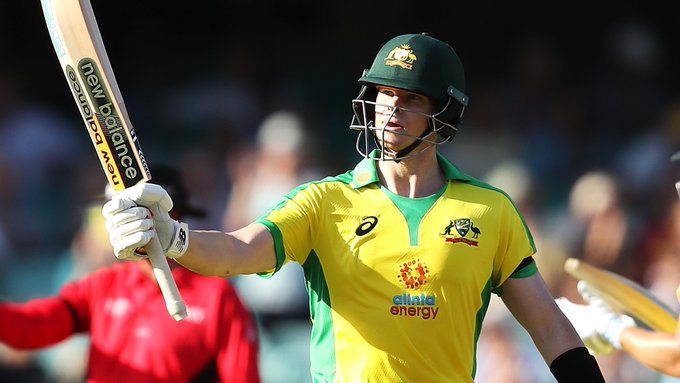 Sydney: Australian batsman Steve Smith, who scored 105 off 66 deliveries, to power Australia to a match-winning total of 374 runs said that his recent discovery of rhythm at the nets in Australia during quarantine helped him get back to form.

“I have been searching for something for a couple of months now. About three days ago, something just clicked. My rhythm came back, everything came back,” he said after the match.

The batsman credited Aaron Finch and David Warner for providing a solid start that allowed him to go after the bowling.

“Finchy (Aaron Finch) and Davey (David Warner) played very well early on. We could come in and be aggressive. I wasn’t thinking too much out there, just seeing the ball and hitting it. I was seeing the ball well. It was a good surface. Nice to contribute to a good win,” said the former Australia skipper.

It's the third-fastest ton by an Aussie too! #AUSvIND pic.twitter.com/6yntvllbiF

Smith on Tuesday had said that he had changed his natural game at the 2020 Indian Premier League (IPL) edition, trying to do power-hitting instead of working out gaps, which affected his rhythm and form in the T20 tournament played in the United Arab Emirates (UAE).

Smith, representing the Rajasthan Royals, scored only 311 runs in 14 games, with the help of three half-centuries.

“For me in white-ball cricket, playing my game, the way I do it, is the way forward. I think in IPL, I got caught up with and tried to be a bit too powerful. (That is) not quite my game. There are players in the world that can get sixes at will and I am not probably one of those. For me it is about hitting proper cricket shots and hitting the gaps and manipulating the field at will. I probably went away from it in the IPL,” Smith had told reporters on Tuesday.

On Friday, he worked the gaps quite well and didn’t go for unconventional shots. Even then, his 105 included 11 fours and four sixes.