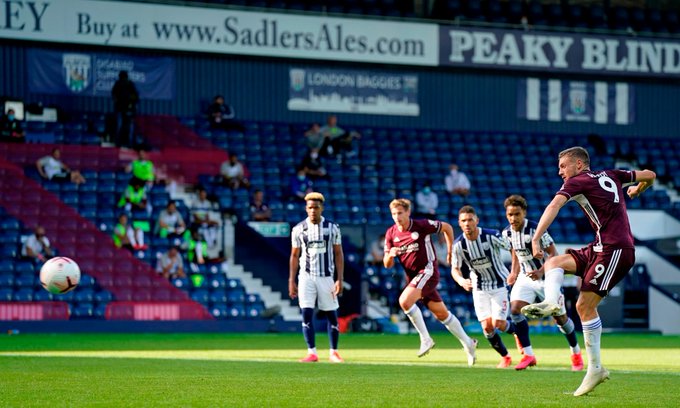 Richarlison missed Everton’s best chance of the first half when he fired wide from a tight angle while Jordan Pickford saved from Spurs midfielder Dele Alli and debutant Matt Doherty at the other end.

Richarlison twice shot wide and Hugo Lloris denied Calvert-Lewin a second as the Toffees looked to double their advantage.

But a single goal was enough to secure Everton’s first league win over Spurs since December 2012 and inflict head coach Spurs Jose Mourinho’s first ever opening-day defeat at the 19th time of asking.

⚽️⚽️⚽️⚽️⚽️@vardy7 has scored in all 5️⃣ of his away #PL appearances against West Brom#WBALEI pic.twitter.com/X9Kr6T2GNL

Harvey Barnes was denied twice in quick succession by Sam Johnstone while Kasper Schmeichel saved from Matheus Pereira at the other end during a goalless first half.

Leicester took the lead in the 56th minute, with Belgian Dennis Praet crossing for compatriot Castagne to head in at the far post.

Vardy made it 2-0 on 74 minutes, scoring from the spot after he was fouled by Kyle Bartley.

He has now equalled Ruud van Nistelrooy’s record of scoring in five successive away matches against the same opponent.

Sometimes you have to learn how to lose: Gonzalez denies Neymar’s racism claim