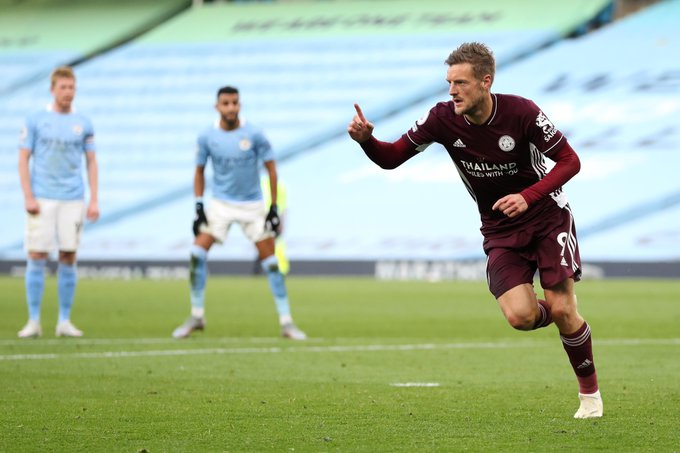 Manchester: Jamie Vardy scored his second hat trick of the season as Leicester came from behind to stun hosts Manchester City in a wild 5-2 win and collect a third straight victory to open the Premier League season on Sunday.

City’s defense couldn’t handle the pace and movement of Vardy, who won two penalties converting both of them either side of a brilliant finish that saw him flick the ball home at the near post with a deft backheel.

Vardy also scored three goals against West Bromwich Albion on the opening weekend as he looks to back up a 2019-20 season which he ended as the leagues top scorer with 23 goals.

Leicester stun Man City at the Etihad with a brilliant performance#MCILEI pic.twitter.com/Bdy4RNdBmL

James Maddison added a fourth for Leicester at Etihad Stadium by curling a shot into the top corner from 25 meters (yards) as City backed off the substitute, and Youri Tielemans converted a third penalty for his team in the 87th by which time Vardy had been substituted.

Riyad Mahrez, a former Leicester player, gave City the lead in the fourth minute with an impressive strike and Nathan Ake pulled a goal back in the 84th for City, who lacked a presence up front with Sergio Aguero and Gabriel Jesus missing.

It was a concerning display by Pep Guardiolas side, which was without a slew of key players through injury and issues related to COVID-19.

It came six days after City looked so assured in beating Wolverhampton 3-1 in its first match of the season.