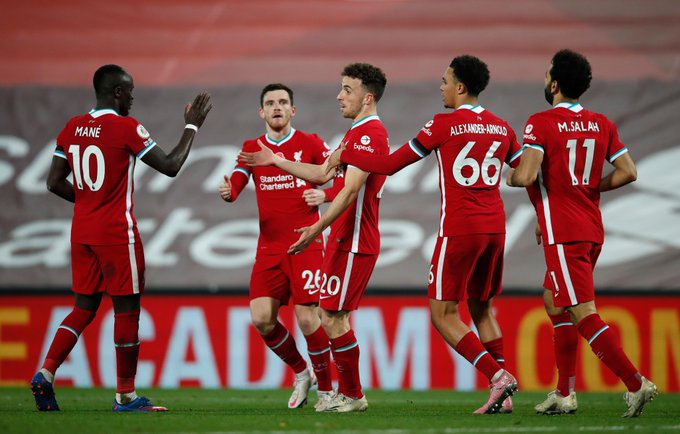 London: Diogo Jota came off the bench to earn Liverpool a 2-1 win over West Ham United in the English Premier League, which helped the champions equal an Anfield record of unbeaten 63-match run.

Pablo Fornals had put West Ham in front on 10 minutes, when he collected a Joe Gomez clearance and struck in a low shot.

Liverpool’s increasing pressure paid off three minutes before half-time thanks to Mohamed Salah’s penalty after the Egyptian had been fouled by Arthur Masuaku.

After the break, Fornals had one shot saved and another blocked by Andrew Robertson.

Shortly after having a goal overturned on 77 minutes after the Video Assistant Referee had spotted a foul in the build-up, Jota scored the winner.

Only Fernando Torres in 2009-10 (8) scored more goals in Liverpool's opening 7 matches of a #PL season than Mo Salah's 7️⃣ this campaign#LIVWHU pic.twitter.com/Dnd9GMJ0OH

Fellow substitute Xherdan Shaqiri played him in with an exquisite pass to finish and send Liverpool top on 16 points, as they equalled their longest unbeaten home run of 63 league matches.

West Ham are 13th on eight points as their four-match unbeaten run was ended.

Hakim Ziyech scored one goal and created another on his first Premier League start as Chelsea beat Burnley 3-0 at Turf Moor.

Ashley Barnes had Burnley’s best chance on five minutes but, after controlling a ball over the top, the striker shot over.

Chelsea doubled their lead on 63 minutes when Mason Mount’s corner was powerfully headed in by Kurt Zouma.

Ziyech turned provider seven minutes later for Timo Werner to make it 3-0, with the German only starting after Christian Pulisic was injured in the warm-up.

Chelsea are five unbeaten and rise to fourth with 12 points.

Burnley are bottom with just one point.