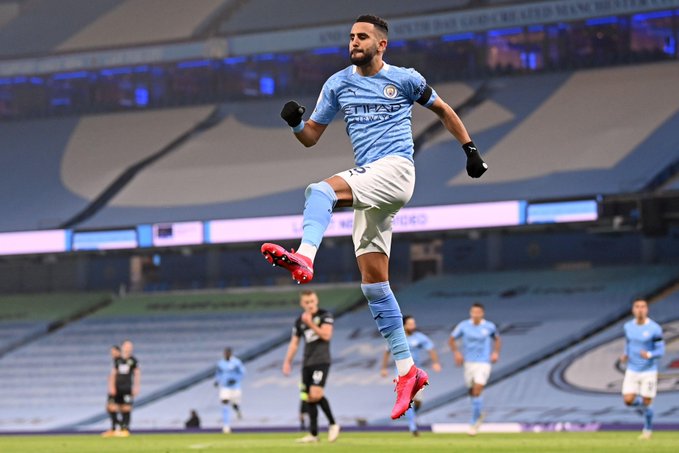 London: Riyad Mahrez netted a hat trick as Manchester City regained its scoring touch on Saturday by thrashing Burnley 5-0 at home for the third straight season in the English Premier League.

Benjamin Mendy and Ferran Torres also scored as City racked up more goals than it had in the team’s three previous league games at Etihad Stadium this season.

Mahrez cut in from the right to score twice in the opening 22 minutes, and Kevin De Bruyne crossed for Mendy to volley in the third goal in the 41st.

The Seagulls snatch a late point but the champions still return to the top of the #PL table 📈#BHALIV pic.twitter.com/wqEsHNdO9W

With the game at 1-0 heading into stoppage time, Andrew Robertson was adjudged to have kicked the foot of Danny Welbeck in the box, and after going over to the pitchside monitor, referee Stuart Attwell awarded the spot-kick, despatched down the middle by Gross.

Brighton had already missed a first-half penalty – Neal Maupay struck a penalty wide after Neco Williams had brought down Aaron Connolly (20) – before Diogo Jota looked to have given Liverpool the victory, dancing past two challenges before finding the bottom corner (60), his eighth strike in eight Liverpool games.

Torres slotted in from close range in the 66th for his first Premier League goal before Mahrez completed his first hat trick for City, heading in a cross from substitute Phil Foden three minutes later.