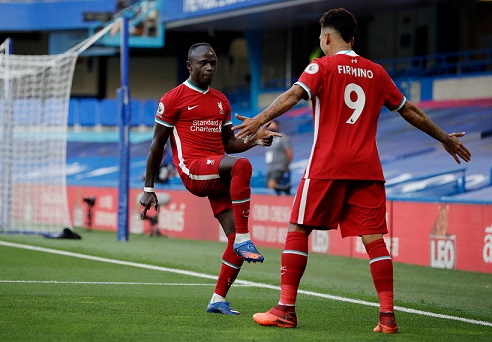 Andreas Christensen was dismissed at the end of a closely-contested first half, with referee Paul Tierney reviewing the defender’s challenge on Mane on the pitchside monitor before changing his original decision to award a yellow card in favour of a red.

Mane scored his first goal of the season four minutes after Thiago Alcantara came on for his Liverpool debut at the start of the second half, heading Roberto Firmino’s cross into the bottom-left corner following a slick passing move.

🤜🤛 Son Heung-min and Harry Kane have combined for more #PL goals (24) than any other duo since the Korean’s move to England in August 2015 #SOUTOT pic.twitter.com/KSWXiQgqLR

Harry Kane became only the second player in Premier League history to be involved in five or more goals in a single match on two occasions as he starred in Tottenham Hotspur’s 5-2 win at Southampton.

Kane provided the assists for all of Son Heung-min’s four goals, and he then scored Spurs’ fifth.

He is the second player to claim five goal involvements in two different Premier League matches, after Arsenal legend Thierry Henry scored three times and claimed a couple of assists on two occasions, against Middlesbrough in 2000 and Leicester City in 2006.

Leicester City came from behind to beat Burnley 4-2 and record Brendan Rodgers’ 100th Premier League victory as a manager.

Serie A: Ronaldo on target as coach Pirlo begins Juventus tenure with win