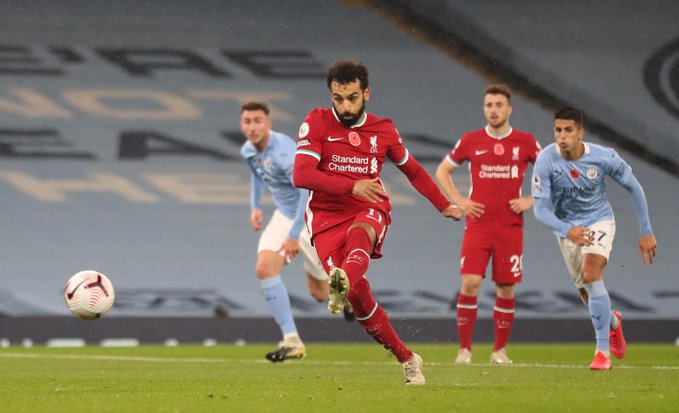 London: Gabriel Jesus cancelled out a first-half penalty from Mohamed Salah as Manchester City drew 1-1 with Liverpool and denied the champions a return to the top of the English Premier League table.

Salah fired Liverpool ahead from the penalty spot on 13 minutes after Sadio Mane drew a foul from Kyle Walker.

But Man City pulled level in the 31st minute with a smart turn and left-foot finish by Jesus from Kevin De Bruyne’s pass.

De Bruyne had the chance to put the home side ahead five minutes before half-time, after a Video Assistant Referee review confirmed a Joe Gomez handball, but the midfielder sent his penalty narrowly wide.

The teams traded chances in the second half, with Jesus’s header from Joao Cancelo’s cross going just wide moments before Roberto Firmino fizzed an effort over for Liverpool, but both sides had to settle for a point.

Man City are 11th on 12 points, six points behind leaders Leicester City, while Liverpool are third and five points above Pep Guardiola’s side.

🤩 @vardy7 scored his first #PL goal against Wolves, meaning he has now scored against 27 of the 30 teams he’s faced in the competition, including all 19 of the current other sides#LEIWOL pic.twitter.com/pnQ2aGjxAv

Jamie Vardy scored one of two first-half penalties as Leicester City went top of the Premier League with a 1-0 home win over Wolverhampton Wanderers.

The striker missed the chance to extend their lead six minutes before the break, Rui Patricio saving his penalty after Rayan Ait-Nouri fouled James Justin.

Ollie Watkins scored two goals as Aston Villa maintained their 100 per cent away record with a 3-0 success at Arsenal.

Villa’s win, their third on the road this campaign without conceding a goal, moves them up to sixth spot on 15 points, three clear of Arsenal in 11th.