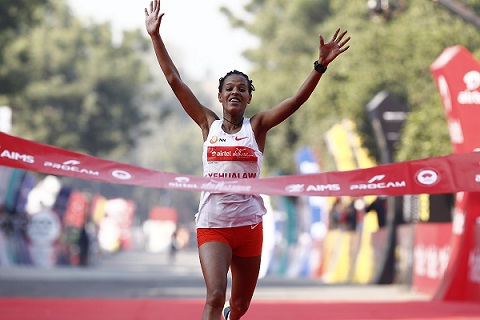 New Delhi: Ethiopia’s Yalemzerf Yehualaw produced a stunning run over in the Airtel Delhi Half Marathon 2020 held to clock the second fastest women’s time ever over the distance when she crossed the line in 64:46 in the race held in a bio-secure environment amid the Covid-19 pandemic here on Sunday.

“My training since the world championships told me that maybe I could break the course record as I ran 65:19 there, but this was more than I expected, and I hoped for a win here after just losing by a second a year ago,” said 21-year-old Yehualaw.

“My plan was to push hard with two kilometres to go and that helped my fast time, and it was also very nice weather,” she added.

Yehualaw won in 64:46 but Chepngetich also ran the race of her life to finish in a personal best of 65:06 and move up to equal-sixth on the world all-time list.

In the men’s race, the event record — with the course having been changed from previous years — also fell when Amdework Walelegn out-sprinted his Ethiopian compatriot and two-time defending champion Andamlak Belihu to win in 58:53, the latter coming home in 58:54.

Amedework made it work and conquered the capital! 🙌

“I had a few bad patches but in the final kilometre I felt strong. I was second in Delhi in 2018 and this is a much faster course which has less sharp turns,” said Walelegn.

“I have to be happy as I ran a personal best. After the pacemaker dropped out I pushed the pace but I think this might have left me with a bit less energy when we sprinted in the last kilometre,” reflected Belihu, who just fell short in his bid to be the first three-time winner in Delhi.

Parul Chaudhary clinched the first position with a timing of 01:12:18 in the Indian elite women’s category, while Sanjivani Jadhav (01:13:00) and Komal Jagadale (01:14:04) finished second and third respectively.