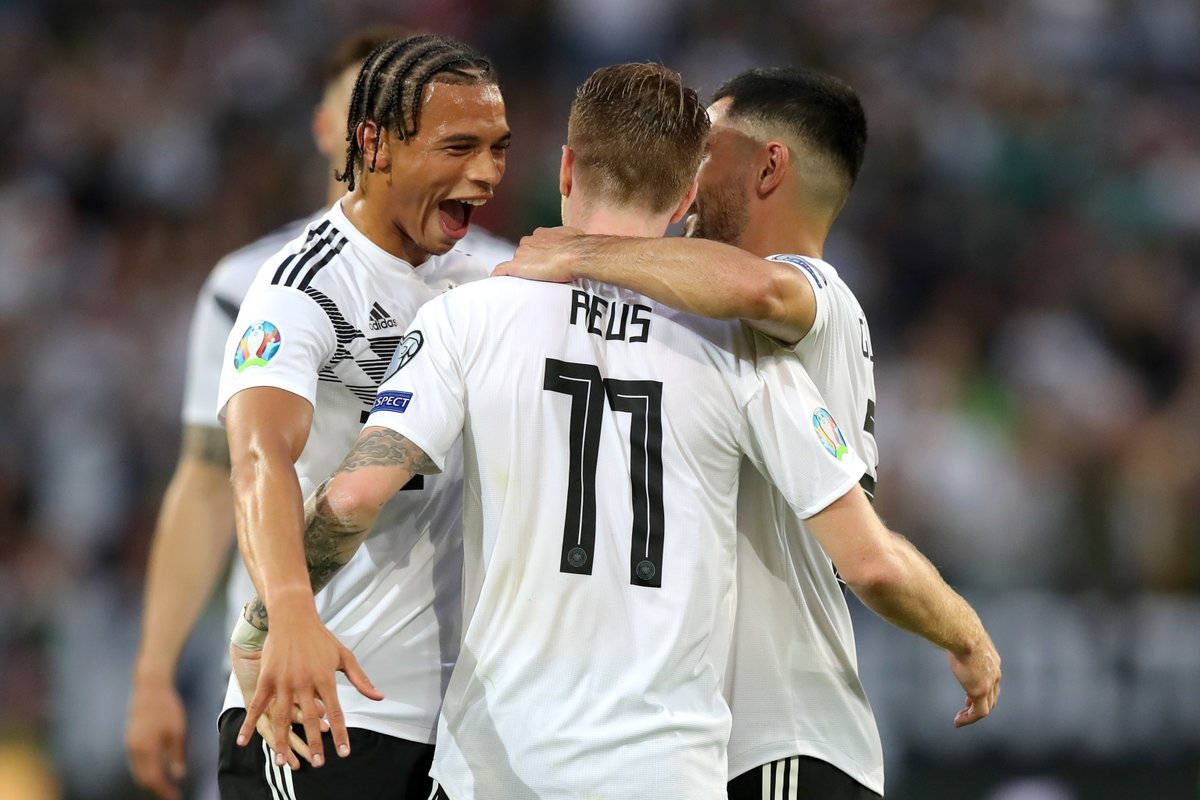 Germany players celebrate a goal in their 8-0 win over Estonia.

Madrid: Belgium, Germany, Italy and Northern Ireland all won their respective matches to stay perfect in the Euro 2020 qualifiers, while World Cup champions France regained their form after an unexpected loss to Turkey.

In Mainz, Marco Reus and Serge Gnabry each had a brace as Germany romped 8-0 against Estonia on Tuesday. Leon Goretzka, Ilkay Gundogan, Timo Werner and Leroy Sane scored the other goals for Die Mannschaft, reports Efe news.

Their third victory in as many matches lifted Germany to nine points, three behind Northern Ireland, who won 1-0 away to Belarus on Tuesday to retain the top spot in Group C thanks to a goal in the 86th minute by Patrick McNair.

Romelu Lukaku scored twice and Kevin de Bruyne added a third goal to power Belgium over Scotland 3-0 in Brussels, leaving the Red Devils atop Group I with 12 points.

Second place belongs to Russia, who defeated Cyprus 1-0 on a goal by Aleksey Ionov, while Kazakhstan routed San Marino 4-0 to climb into the third spot with 6 points and a better goal difference than Scotland.

💯 Kylian Mbappe has now scored 100 goals for club and country 👏

Les Bleus have nine points, the same as second-place Turkey and Iceland in third, but enjoy an edge on goals.

The Turks, meanwhile, missed a chance to surge ahead of France, losing 2-1 to the Icelanders. Albania blanked Moldova 2-0 in the other Group H contest.

Italy conceded a goal to Edin Dzeko in the 30th minute to fall behind 1-0 against Bosnia and Herzegovina in Turin, but Lorenzo Insigne equalized for the hosts at the start of the second half and Marco Verratti got the winner with four minutes left in regulation.

With 12 points, Italy lead Group J by three points over Finland, who bested Liechtenstein 2-0 on Tuesday.

Armenia are third in the group after beating Greece 3-2 in Athens.

In Group E, Hungary held Wales 1-0 to move into first place with 9 points, though Slovakia and Croatia – both with 6 points – each have a game in hand.

The Welsh, who have only three points from three matches, face an uphill battle to qualify.

Marek Hamsik had two goals for the Slovaks in a 5-1 away triumph over Azerbaijan. Stanislav Lobotka, Juraj Kucka and David Hancko also scored for the visitors.

Casillas yet to decide on future

Retired Anas returns after Stimac names him in preparatory camp