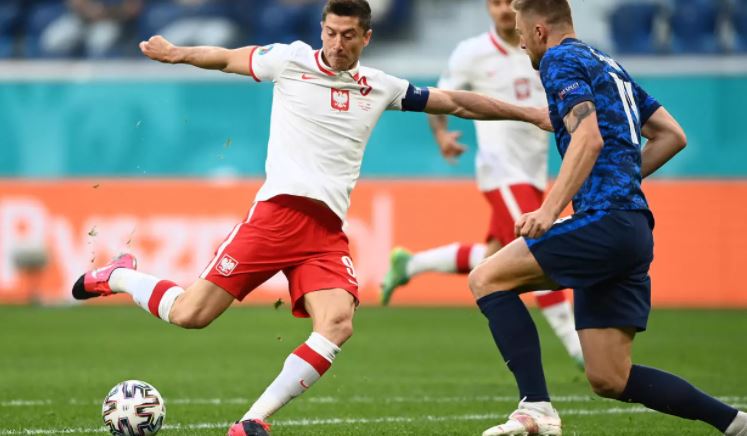 St Petersburg: Slovakia started their first major tournament with a win after shocking an uninspired Poland 2-1 through Milan Skriniar’s second-half winner in their Group E curtain-raiser in Saint Petersburg on Monday.

Slovakia looked comfortable in the first half. They opened the scoring in the 18th minute after Robert Mak’s solo run and effort dropped off Wojciech Szczesny’s near post before bouncing off the goalkeeper’s right shoulder into the goal.

Poland needed some time to recover, and restored parity 27 seconds after the restart as Karol Linetty finished off Maciej Rybus’ build-up work.

The Polish team increased the pressure but suffered a setback at the hour mark when Grzegorz Krychowiak was shown his second yellow card and received the marching orders.

Slovakia showed no mercy and utilised their numerical advantage moments later as Poland failed to clear a corner, allowing Skriniar to drill the decider from 14 meters into the top left corner to stun Poland.

Poland pressed frenetically for the equaliser. Slovakia’s defines, however, stood firm and secured the top spot in Group E for the moment.

Czech Republic striker Patrik Schick scored twice to give his side a 2-0 win in their opening Euro 2020 game against Scotland at Hampden Park on Monday.

Schick’s finishing was the difference between the two sides, with his first goal in the 42nd minute coming from a smart header following Vladimir Coufal’s measured cross after the Scots failed to clear a corner.

Schick’s second in the 52nd minute was a work of art as he latched onto a rebound out of the Czech defence before hitting a 50-metre effort, which curled and dipped over the stranded David Marshall in the Scottish goal.

Scotland had bad news before kick-off as Arsenal defender Kieran Tierney forced to sit the game out with a knee injury. He was replaced by Liam Cooper in a three-man defence.

Unbeaten in their last five games and roared on by 12,000 fans at Hampden Park, Scotland kicked off looking to take the game to the Czechs, with Andy Robertson their main threat.

The Liverpool defender whipped in a low cross which Lyndon Dykes side-footed just wide in the 18th minute before his curling shot was magnificently tipped over by Thomas Vaclik just after the half-hour.

Another cross from Robertson produced a good defensive header from Ondrej Celustka as the Scots worked to get on top of a slightly scrappy encounter.

As the half came to an end, the Czechs exerted more pressure on the Scottish goal, forcing three consecutive corners, and after the Scots struggled to clear the ball, Schick, who had earlier headed over, opened the scoring after Coufal’s excellent cross in the 42nd minute.

To have a realistic chance of progressing to the knockout stages, Scotland need to avoid defeat against England at Wembley in their next game on June 18.