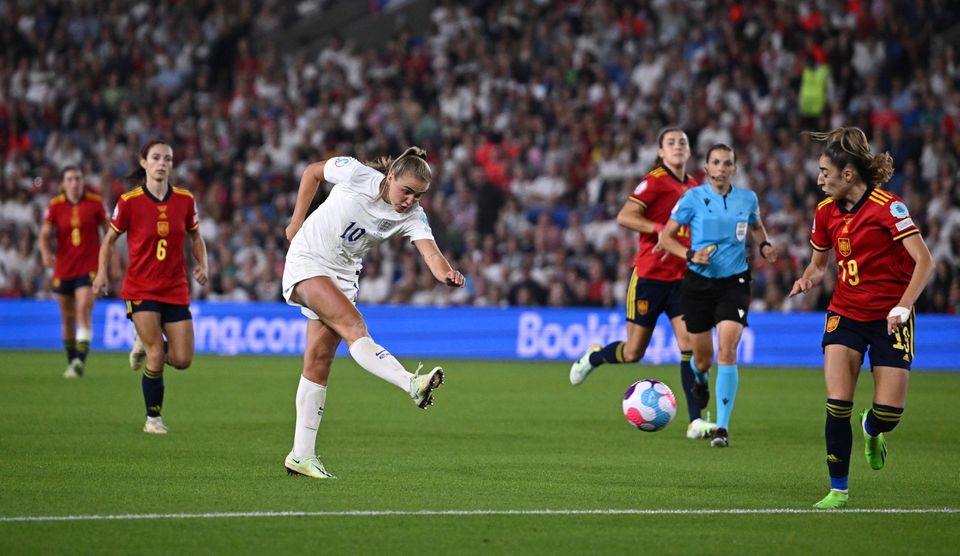 Brighton: England’s Georgia Stanway scored with a wonderful extra-time strike to earn them a 2-1 win over Spain on Wednesday in an excellent Euro 2022 quarter-final that sent the Lionesses into the last four.

Spain frustrated their opposition during the whole 90 minutes of the match and dominated in terms of ball possession and shots. Other time-stalling techniques used by them did not allow England to reach their full potential in the match.

After the first half break, Spain took the lead shortly. England was denied their opening goal and a penalty shout via VAR in the first half. Half-time substitute Athenea del Castillo beat Rachel Daly, before cutting the ball back for Eshter Gonzalez, who made no mistake in firing it past Mary Earps in the 54th minute.

By this, England had conceded their first goal in the 2022 edition of the tournament and with Spain in lead till the 84th minute, it looked like the hosts would make an early exit from the tournament. But substitute Ella Toone scored an equalizer and sent the game into extra-time.

Spain was agitated by the equalizer and felt that a foul had happened, but the referee and VAR did not feel the same and their substitute goalkeeper Misa Rodriguez was given a yellow card for dissent while on the bench.
The English team was much better in the extra time and things continued to move in their way. In the 96th minute, Stanway hit a stunning goal and sealed the game for the hosts.

Now in the semi-finals, England will now face either Sweden or Belgium on Tuesday at Bramall Lane. Spain has failed to make it past the quarter-finals for the third consecutive time in the European Championships.

England head coach Sarina Wiegman was quoted by Sky Sports as saying following the match: “I think I went a little crazy. I was so happy – I tried to stay calm but it was so close, a game which could have gone either way. I was so happy that we won.”

“We showed resilience, we showed we could come from behind. From the 80th minute, we changed shape and scored very quickly. Then we went back to that, and in extra-time at the moment we scored we were a little better. We were a little fresher, then they had to score again and were pushing,” she added.

“For the fans in the stadium and watching on TV, it was an incredible game. The fans here were so behind us, it was incredible to experience. Every game, the subs have had an influence. It shows the depth of our team, the eagerness of every player to start or come on. Everyone is also on the same page all the time, and wants to make a difference. I am just really happy with that, we are all supportive, everyone knows their task, otherwise you cannot do what you bring on the pitch,” she continued.

“I do not make the decisions on my own, we have a technical staff communicating what we want to do before a game, during a game we talk about scenarios – it is teamwork too. What the fans did for us was really home advantage, it was really incredible to experience and it really helped our team,” she concluded.

Spain head coach Jorge Vilda also said, “It is a disappointing defeat and to go out of this competition. If there is a good way to lose, I think it is by playing the sort of game my players have done tonight. We are all very proud of what we saw on the pitch, everyone has improved, we gave everything, it was not to be and now we have to keep our heads held high and we will analyse it further going forward.”

“We have a very good team here, there is a bright future ahead based on what we have seen at this tournament. It is a difficult day for us, we’ll have to just digest it over the next few days and see where we can improve,” she continued.

“We have done well in many areas, and then when there are big moments in the future we hope that we can avoid the sorts of setbacks we’ve had this time around. When there are just a few minutes left, you are thinking about how not to concede a goal. Then a cross came in, the ball was knocked down and we went into extra-time. I did not have a clear view and have not had a chance to see it back. We can take the good performance from our players, and there is a bright future ahead.”

“We scored the goal, but then we were losing possession and finding it hard in midfield to get the ball. England were looking dangerous from wide areas and corners, so then we took off players who we thought would help us less in those areas.”

“Everyone did well and performed at a high level. We would have liked to have had more of the ball, I think the key would have been scoring a second goal to finish off the game. It was not possible, and that led to what happened afterwards,” she concluded.

Kolkata derby to kick off Durand Cup on August 16