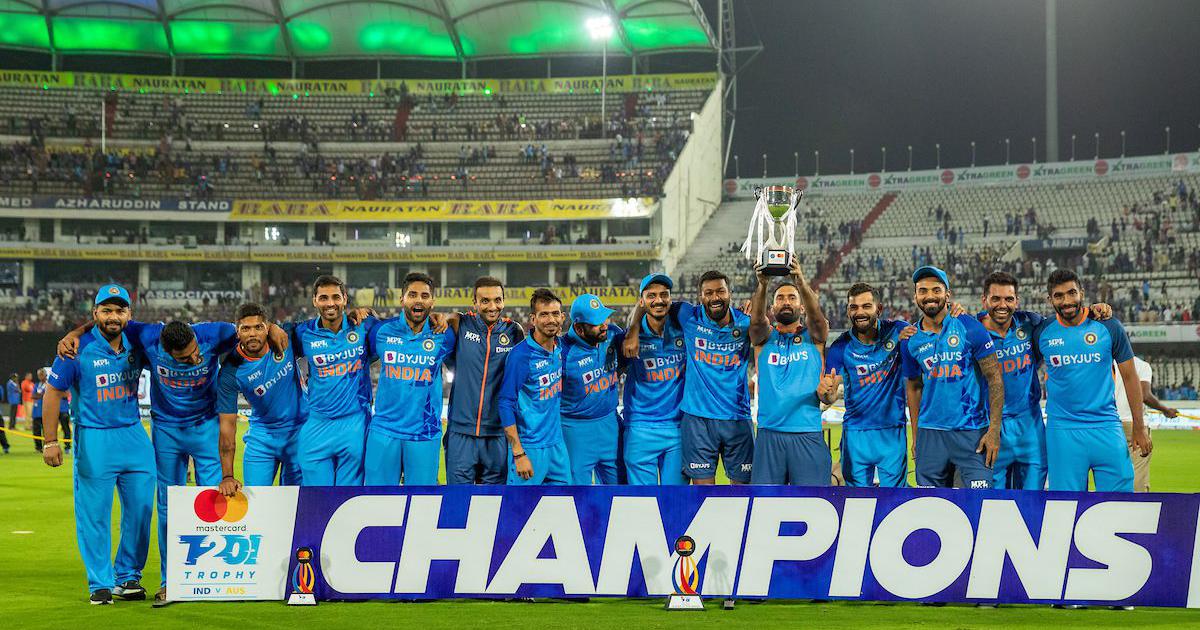 Left-arm spinner Axar, who was shoed in as a like-for-like replacement for the injured Jadeja, impressed everyone with his bowling, ending as the leading wicket-taker in the three-match series.

“Axar, in particular, had an outstanding series. With Jaddu out everyone thought that it might become a bit of a weakness for India, but they’ve found another one again, which tends to happen,” McDonald said at the post-match press conference after India clinched the series.

To give you an idea, the next highest wicket-taker had just 3⃣ wickets in the #INDvAUS series 🤯

Bapu was in a league of his own 💙#YehHaiNayiDilli @akshar2026 pic.twitter.com/3ohlMIYChV

The Australian bowling attack, comprising the pace duo of Pat Cummins and Josh Hazlewood, was taken to the cleaners by the Indian batters.

Asked if it’s a concern heading to the World Cup, McDonald said: “Across the series the run rate was high, it was entertaining cricket from the get-go. Bat dominated the ball, so there was really no place to hide for bowling units, in particular death.

“We worked our way through some plans. We saw some good results with some of the plans that we implemented that might be able to transition to the World Cup.” McDonald added that Australia will have reinforcements in the form of Mitchell Starc when they begin the defense of their World Cup title at home next month.

“The connection between here (India) and Australia might be slightly different, a little bit more bounce, different tactics. Mitchell Starc comes back into the picture being one of our best death bowlers. So, we feel like we’ll get reinforcements there.” McDonald feels most of the bowling attack is “under the pump” due to the skills of the batters.

“The conversations always going to be can you get better at your death bowling? The answer to that is yes.

“We encourage our guys to make good decisions and execute them. Sometimes the batter out-executes you and we’ve seen that with Hardik (Pandya) across the series.

“Suryakumar Yadav was outstanding today and he’s gonna be dangerous in the World Cup but he showed what he can do.” Australia were without a few of their World Cup-bound players due to injuries but the head coach feels the defending champions have enough depth to overcome the situation.

“It’s fortuitous that some of the guys got the opportunity here. We got a couple of injuries which are concerning leading into a World Cup. You don’t like to see some of your mainstay players out of the team leading in but we feel as though we’ve got some good options in depth.” In the absence of David Warner, who was rested, Cameron Green “embraced the challenge of opening”.

The all-rounder amassed 118 runs, including two belligerent half-centuries to give Australia great starts.

“I’ve asked him to show great intent on top of the order and everything that we’re seeing so far shows that he’s doing that.

“It’s probably opportunistic the way that he’s come into the opening position with obviously David Warner not being here and a couple of other players from our World Cup 15.

“And that’s all you can do, given an opportunity… Before we came over here we thought he had the skill sets to be able to succeed there, and he’s taken on some of the best bowlers in world cricket.”