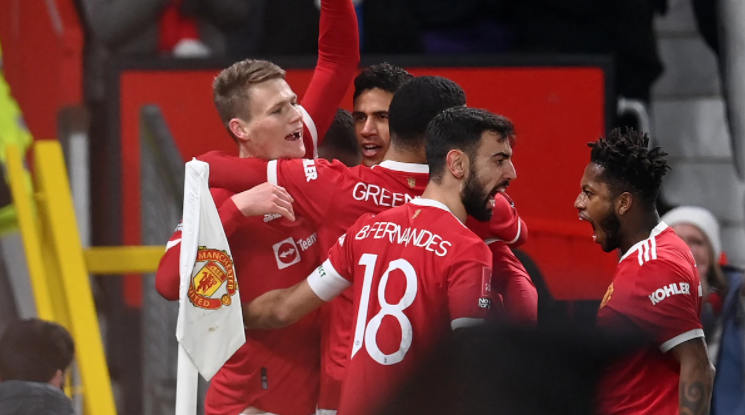 New Delhi: Ralf Rangnick admitted Manchester United were far from perfect despite getting a much-needed 1-0 win over Aston Villa to reach the fourth round of the FA Cup.

Scott McTominay headed home the only goal after just eight minutes, but Villa were left to rue a host of missed chances and a controversial VAR review that ruled out an equaliser from Danny Ings in the second half.

Interim manager Rangnick desperately needed a response to a week of unrest in the United camp that followed a dismal performance in losing 1-0 at home to Wolves.

One big decision was taken out of the German’s hands as Cristiano Ronaldo was not fit to feature.

But there was little improvement in the performance despite holding out to set up a fourth round clash at home to Middlesbrough.

“To say that this was a perfect game, nobody would believe that. Of course it was not,” said Rangnick.

“We still have quite a few things we can get better at, but a clean sheet was important today and we worked together. Still a lot of things to improve but it is easier to do that with a 1-0 win.”

United got the start they needed to settle the nerves as Fred’s perfect cross picked out McTominay to power in a downward header.

However, all of the shortcomings that have dogged a shambolic season under two managers for the Red Devils were soon revealed as Villa dominated the game.

“I have no complaints over what the players gave or the performance, but we go away frustrated we are out the FA Cup,” said Villa boss Steven Gerrard.

“I thought we were good enough to win the game but we haven’t been ruthless enough.”

Ollie Watkins failed to turn home a corner at the back post, Emiliano Buendia’s drive across goal just evaded Ings and David de Gea produced a stunning save to deny John McGinn as the visitors passed up a hat-trick of chances in quick succession.

United were also without injured captain Harry Maguire and his understudy Victor Lindelof gifted Villa another golden chance to equalise with a heavy touch that let Watkins in, only for his shot to come crashing back off the crossbar.

The home side were restricted to counter-attacks, but could also have stretched their advantage before the break as Emiliano Martinez parried Edinson Cavani’s drive before Marcus Rashford’s effort was cleared off the line by Matty Cash.

Villa won at Old Trafford earlier in the season under former manager Dean Smith, but have improved markedly since Steven Gerrard’s arrival as boss in November.

The visitors twice had the ball in the net in the second half but were denied the chance to take the tie to extra time by a lengthy VAR review.

After Ings bundled in Ezri Konsa’s knockdown, VAR initially checked whether the striker was offside.

But it was referee Michael Oliver who made the final call to rule the goal out for a foul on Cavani by Jacob Ramsey as the ball was played into the box.

“We had good rhythm, playing well, pushing for the equaliser and that three-and-a-half minutes took a lot of the sting out of the game,” added Gerrard.

Another moment of magic from De Gea was also needed to see United over the line as he turned Cash’s drive wide.