A section of Mohun Bagan’s social media savvy fans took offence on its implication, suggesting that ATKMB is being viewed by ISL organisers as a continuation of ATK rather than the new avatar of Bagan, who would make their ISL debut against Kerala Blasters on November 20. 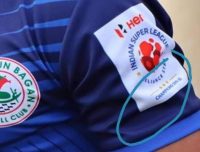 The “Three stars” and “Champions 2019-20” insignia which started the controversy.

ATK Mohun Bagan being described as ‘defending champions of ISL’ also didn’t go down well with them, who vehemently protested on social media using #RemoveATK and placards at the club’s Kolkata Maidan tent.

Adding fuel to fire was an ISL promotional video featuring Sourav Ganguly, an ATKMB director, which showed the erstwhile red and white ATK jersey being washed together with Mohun Bagan’s discernible green and maroon shirt.

“As discussed with FSDL, the issue of three stars on the sleeve with the ISL logo has been discussed and has been done away with,” Bagan general secretary and an ATKMB director Srinjoy Bose said in a statement.

Changes would also be made in ISL’s website to denote ATK Mohun Bagan’s statistics from the 2020-21 season onwards and not from 2014 when ATK FC featured in the tournament’s inaugural edition.

“FSDL has started modifying the statistics section in the ISL official website to reflect statistics before 2020-21 to be attributed to ATK FC. ATK Mohun Bagan stats will be accumulated from season 2020-21 onwards,” Bose added.

Apart from being one of India’s foremost clubs, they felt Bagan’s contribution to Indian football, epitomised by their IFA Shield triumph in 1911 that aroused nationalistic feeling in India’s struggle for independence, was side stepped to glorify ATK franchise that has withdrawn its affiliation after merging with Bagan.

Fans have demanded the video to be pulled down and Bagan’s ‘legacy, history, heritage and tradition’ to be given due recognition and importance.

Earlier, another ATK Mohun Bagan director Debasish Dutta had also promised of resolving all concerns. ISL organisers are yet to officially comment on the issue.

“In the light of recent events, we have approached Mr Sanjiv Goenka, who took an active interest and proactive steps to address the concerns of the Mariners and spoke to different stakeholders to address the issue on an urgent basis,” Bose said.

He added that initially they weren’t aware of details of the promotional but have received assurances from broadcasters Star Network and league organisers that the controversy-causing video would be edited as per demands.

“We were not privy to the details of the recent promotional video launched in different social media handles of ISL and broadcasted in Star Network. As soon as we noticed the commercial we got in touch with the top management of ATK Mohun Bagan who took up the matter very seriously with FSDL and Star Network.

“We have been assured that the promo which hurt the emotions of Mohun Bagan fans, will be modified. The changed version will be used in all social media handles and broadcasting channels very soon after the necessary edits.”

Amidst this discord, ATK Mohun Bagan announced their 27-member squad, striker Jobby Justin was kept out of it following an ACL injury.