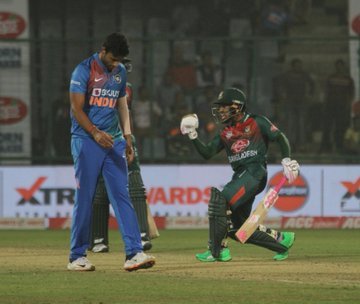 Mushfiqur Rahim guided Bangladesh to their first-ever T20 victory against India with an unbeaten 60 where a butter-fingered Krunal Pandya and an indecisive Rishabh Pant let the team down despite a par-score on a tricky Feroz Shah Kotla surface.

“It was a defendable score, and we made mistakes on the field. The guys are a bit inexperienced, and they can learn from that, perhaps not make them the next time. The reviews (DRS) were a mistake from our side,” Rohit admitted during post-match presentation ceremony.

However Rohit gave credit to Bangladesh for winning it in a convincing manner.

“Not to take credit away from Bangladesh. They put us under pressure right from the start when we were batting.”

Rohit then explained the DRS calls — (one off Yuzvendra Chahal’s bowling), which he didn’t take on Pant’s insistence. The TV replays later showed that Mushfoiqur would have been out. The second one which they took was a caught behind off Soumya Sarkar, when there was no edge and India lost a DRS.

“The first ball he (Mushfiqur) played on the back-foot, we thought it was going down leg, and the next one on the front-foot. But we forgot how short he is. We weren’t up to the mark on the field, but batting-wise I think we put up a competitive score,” the skipper assessed.

Yuzvendra Chahal (1/24 in 4 overs) is back in T20s and skipper feels that the Haryana leg-spinner is an asset in this format.

“Chahal was always welcomed into this format. He’s crucial to this team, and he showed how important he is in the middle overs, when the batsmen are set. He completely understands what he needs to execute, and that makes it a little easier for the captain as well.”

Man of the match Mushfiqur said that his aim was to take the game deep and get one good 16-20 run over off one of the two pacers.

“Soumya (Sarkar) and I had a chat, and we thought of dragging the game deep, and any of the quicks could have been targetted for 15-20 in an over because the spinners got a lot of assistance so it was hard to hit them. Naim also played really well to start with.”

T20 is not one of Mushfiqur’s preferred formats but he feels that he is slowly getting better at it.

“I’m trying my best to evolve as a cricketer, and I will try to perform in each and every game for Bangladesh.”

For skipper Mahmudullah Riyad, captaincy became easier as his men were able to execute what he expected out of them.

“I think it was all based on how we started. The bowlers did a great job, everyone chipped in. I think we fielded really well and that gave us momentum going into our batting. I think captaincy is made easy because of the boys who have performed really well.”

Bengaluru held to third straight draw by Jamshedpur in ISL