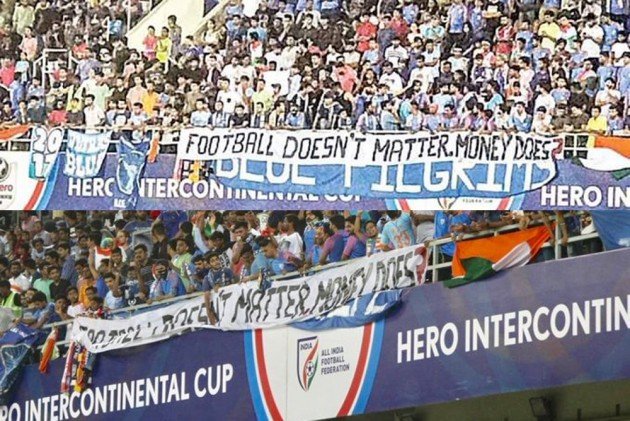 No clear-cut solution to Indian football structure is in sight.

New Delhi: No matter how grave the situation, FIFA retains its faith in the All India Football Federation’s (AIFF) ability to find a pathway acceptable to all stakeholders regarding the restructuring of domestic football in the country. football news

FIFA identified the prevalent club football imbroglio in India as “complex” and observed that a “prudent and measured approach” would be required to solve the crisis, in a letter addressed to Minerva Punjab FC director Ranjit Bajaj, who told Sports Lounge that I-League clubs are now ready to move court to seek justice.

The I-League clubs allege that they have been shortchanged by the AIFF, despite its president Praful Patel insisting that the I-League and the ISL, a tournament conceptualised and run by AIFF’s marketing partners, would continue to exist parallely for the next “two-three” years.

FIFA’s acting deputy secretary general (football) Mattias Grafstrom, said the unresolved issues would require time to be sorted appropriately and till then the AIFF mooted two-league system would be the best way to move forward. 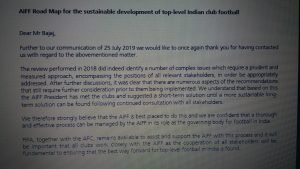 A grab of the FIFA letter.

“The review performed in 2018 did indeed identify a number of complex issues which require a prudent and measured approach, encompassing the positions of all relevant stakeholders, in order to be appropriately addressed,” he wrote.

In its 2018 report, FIFA had recommended a unified 16-team top tier league by 2022-23. But Grafstrom identified that some of its recommendations require further deliberation. The AIFF has repeatedly said they are contractually bound to nominate ISL as the country’s top league.

“It was clear that there are numerous aspects of the recommendations that still require further consideration prior to them being implemented,” Grafstrom added.

“We understand that based on this, the AIFF President has met the clubs and suggested a short-term solution until a more sustainable long-term solution can be found following continued consultation with all stakeholders.”

Entry into the ISL, a closed league without promotion and relegation, remains in the hands of the AIFF’s marketing partners. New clubs can only enter the league through a tender process after agreeing to lump-sum financial guarantees, including payment of an upfront “franchise fee”, believed to be around Rs 15 crore.

I-League clubs have voiced their unwillingness to cough up such a huge sum in an economically-sensitive football market, which has triggered a deadlock in negotiations. But FIFA reposed its faith in AIFF’s ability to wriggle out of the mess it finds itself. 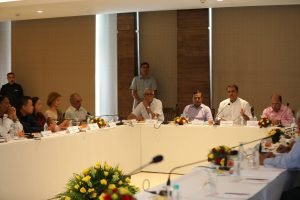 AIFF president Praful Patel (centre) has mooted a short term solution till a unified league could be formed.

“We therefore strongly believe that the AIFF is best placed to do this and we are confident that a thorough and effective process can be managed by the AIFF in its role as the governing body for football in India,” the letter further added. football news

“FIFA, together with the AFC, remains available to assist and support the AIFF with this process and it will be important that all clubs work closely with the AIFF as the cooperation of all stakeholders will be fundamental to ensuring that the best way forward for top-level football in India is found.”

The AIFF wasn’t forthcoming with an immediate response, but Sports Lounge understands that top AIFF officials believe that what FIFA has said has been their stance all along. They say, on condition of anonymity, that the AIFF has only honoured the master rights agreement (MRA) that it signed with its marketing partners in 2010.

But Bajaj is not willing to be sweet talked into believing that the AIFF are that naive. It is only on legal advise, that they wrote to FIFA and the AFC for a response. Now that it has arrived it clears decks for them to move to court, whatever be its eventual ramifications.

“We are moving court within this week. I would be writing to FIFA and even send video evidence of how the AIFF has misled us for all these years. If required I will fight alone and even knock the doors of the Supreme Court and the Court of Arbritration for Sports (CAS),” Bajaj told Sports Lounge.