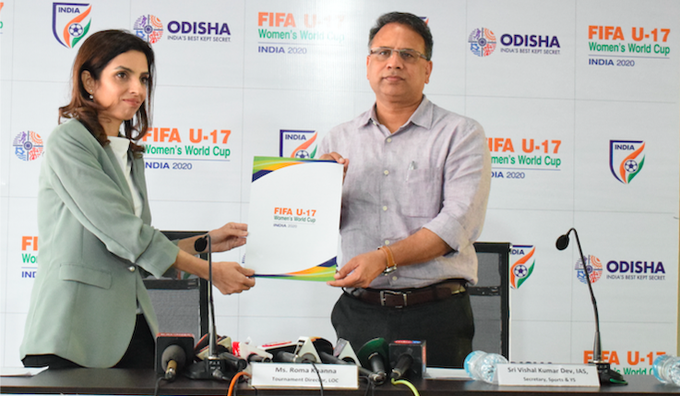 Mumbai: World football’s governing body FIFA has inspected five cities which are likely to host matches of the U-17 Women’s World Cup, to be held in India next year.

In March, FIFA President Gianni Infantino had announced that India would host the U-17 Women’s World Cup in 2020.

“As of now we have visited and inspected five host cities that include Kolkata, Bhubneshwar, Ahmedabad, Goa and Navi Mumbai. These were the cities that we had inspected (however) there is a lot of interest from other cities as well,” tournament director Roma Khanna told reporters here.sports news headlines

Khanna and Philip Zimmermann, who is the technical development services programme manager, visited a municipal school in Worli where a local football league was kicked off.

According to Khanna, the tournament window for the global event would also be known within the coming months.

“Last month we confirmed Bhubaneswar as one of the provincial venues for the World Cup. We have three more venues that we will be confirming in the coming months. In the next few months, the tournament window would also be known,” Khanna said.sports news headlines

https://twitter.com/IndianFootball/status/1166360940260012034?s=20
She said the Local Organising Committee of the event will give a provisional confirmation to the host city, which will be later ratified by FIFA.”We have not yet confirmed (the other cities yet). In case of Bhubaneswar, we have worked out on what was needed to be done and once we were confirmed with delivery and timelines, we confirmed Bhubneswar as the venue.

“It is a similar exercise that we will be going through with each of the other host cities and (when) we are comfortable with that (them), we will give them provisional confirmation and then they will be confirmed by (FIFA),” she elaborated.

According to Khanna, there will be “another FIFA inspection where, and second round of assessment will be done by the end of this year”.

As a host country, India gets a direct entry into the tournament.

Meanwhile, Zimmermann, who is associated with FIFA Football For Schools program, informed that the world body will launch a “app” in October to train coaches.