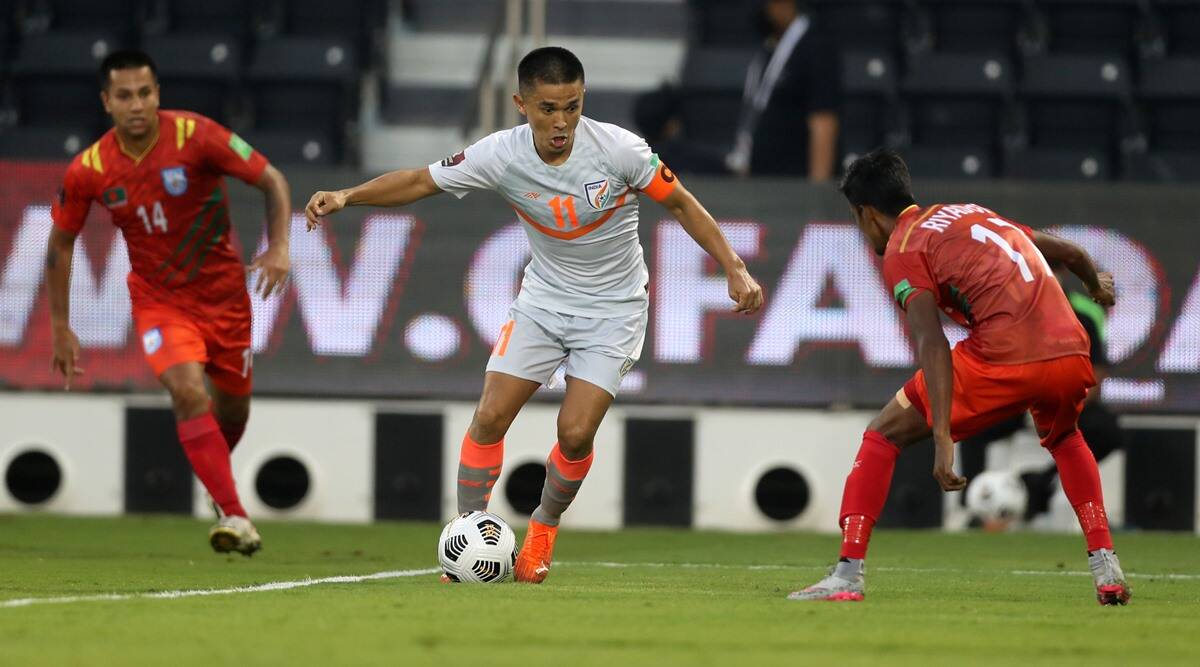 New Delhi: Goal-machine Sunil Chhetri will look to add to his tally and enter the all-time top 10 scorers’ list as a buoyant India meet Afghanistan in the joint 2022 World Cup and 2023 Asian Cup qualifiers on Tuesday.

While the Indian team needs just a draw from their final game against Afghanistan to secure a place in the third round of AFC Asian Cup qualifiers after Oman defeated Afghanistan 2-1 on Friday, a hat-trick for Chhetri will see him equal the iconic Pele in terms of numbers of goals scored in the international arena.

Chhetri is also just one goal off entering the all-time top-10 list of goal-scorers, something he can easily achieve against Afghanistan, if not a hat-trick.

A Chhetri-inspired India ended their winless run in international football when the captain struck a brace against Bangladesh in their previous outing.

The talk since then mostly centred around the Indian striker surpassing the legendary Lionel Messi as international football’s second highest scorer among active players.

A veteran in top-flight at 36, Chhetri played down the comparisons with the Argentine global superstar, but he will certainly look to put his best foot forward come the next match and add to his tally of 74 goals.

If the Blue Tigers can avoid defeat in the upcoming match, they will finish third in their group, an improvement over the fifth-place result during the last campaign.

India are already out of contention to progress further in the World Cup qualifying campaign, and is now looking to secure a berth in 2023 Asian Cup, scheduled to be held in China.

India will enter the game as clear favourites despite Afghanistan’s ability to fight it out.

Igor Stimac’s men will be high on confidence after thoroughly dominating Bangladesh, against whom they enjoyed nearly 75% possession while completing more than 600 passes.

If they are to repeat that kind of impressive stats, India will need the duo of Chhetri and Manvir Singh to fire upfront, with Brandon Fernandes marshalling the midfield and keeping the supply chain flowing.

Stimac dismissed apprehensions that India may play out for a draw.

“I need to say that I don’t know any coach or any team who would come out playing for a draw,” Stimac stated at the pre-match press conference.

“Even that might seem to be a situation when you are facing much better sides. Then, you need to drop and defend for your life and wait for one, two or three chances to counter-attack like against Qatar.

“But, we are not going out to play for a draw. Rather, we will go out to win it.

“That’s what we are aiming to do. We need to start doing it from the kick off. I know and am very confident that all our boys are ready and fit. They need to enjoy the game.”

India are currently placed on six points after seven matches in comparison to Afghanistan’s five points from seven games.

India goalkeeper Gurpreet Singh Sandhu added: “I think it’s important for us to stay fresh. Afghanistan have good quality players who can manipulate the ball and convert if given the chance.”

Stimac did mention that his players are confident after the victory against Bangladesh.

“The result against Bangladesh makes us confident. We are very happy that with the three points against Bangladesh we secured getting out of the danger of playing in the play-offs. Afghanistan are a better side than Bangladesh, and it will not be easy,” Stimac said.

“Afghanistan are full of players with international experience, and most of the players are playing in foreign leagues.”

With Stimac reposing immense faith in him, Brandon has established himself as one of the country’s top players playmakers. He has provided three assists out of the five goals India has scored in the qualifying campaign so far and he would be more than eager to continue in the same vein.

Form and past record both favour India and anything less than a victory for the Blue Tigers will be seen as an upset.

As far as Afghanistan are concerned, they will take heart from their spirited performance in their previous outing against India, who were held to a stalemate at home by their lower-ranked opponents in 2019.

But the recent defeat against Oman means Afghanistan are not among the top fourth-placed teams in the World Cup qualifiers and a failure to win against India would send them to the playoffs just to get into the third round of Asian Cup qualifiers.