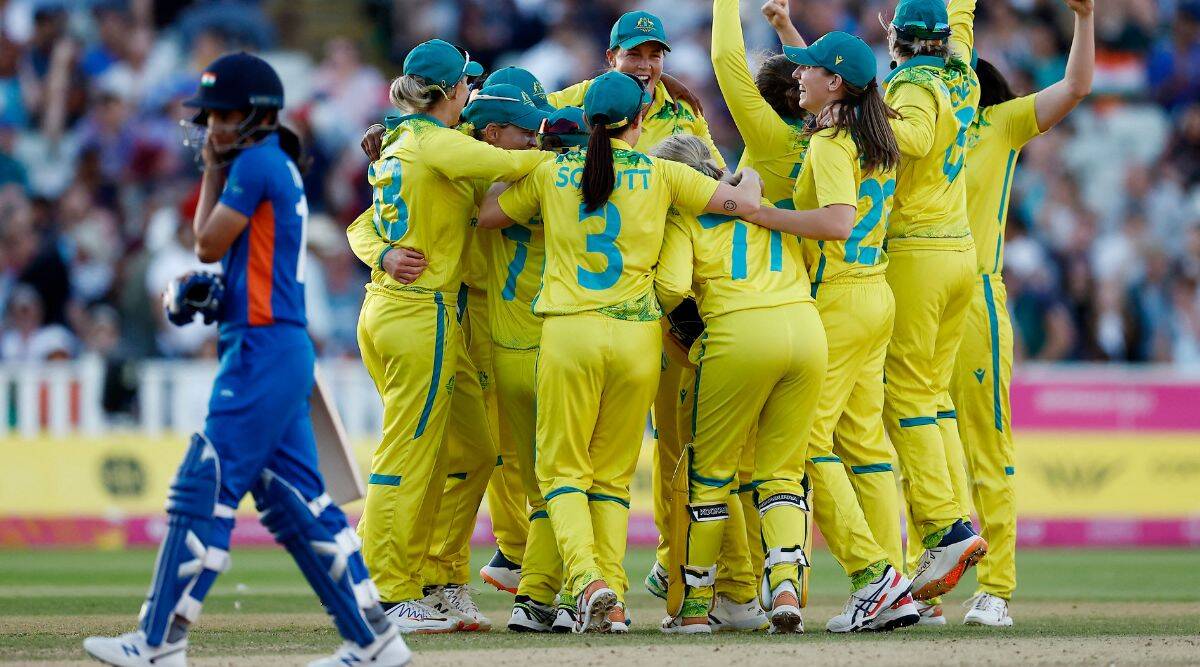 Birmingham: World champions Australia beat India by nine runs in a thriller to win the gold medal in the women’s cricket event at the Commonwealth Games on Sunday.

Batting first, Australia scored 161 for 8 in 20 overs with Beth Mooney scoring 61 off 41 balls while Renuka Singh taking 2 for 25.

India skipper Harmanpreet Kaur played a brave knock of 65 runs but was unable to save India from the hands of defeat as Australia won the match by nine runs to clinch the Commonwealth Games 2022 title.

India were bowled out for 152 and had to settle for the silver medal in their maiden Commonwealth Games campaign.

For India, Harmanpreet Kaur smashed 65 runs, while Jemimah Rodrigues played a great knock of 33 runs. For Australia, Ashleigh Gardner bagged 3 wickets while Megan Schutt scalped two.
Chasing the target of 162 for the gold medal, India got off to a bad start as they lost their star opening batters Smriti Mandhana and Shafali Verma in under five overs.

Openers Smriti Mandhana and Shafali Verma, who were in good touch coming into the final, could only score 6 and 11 respectively, leaving India struggling at 22/2.

Jemimah Rodrigues along with skipper Harmanpreet Kaur tried to anchor innings. The duo kept piling runs with good running between the wickets.

Harmanpreet hammered Darcie Brown for 14 runs in the 6th over of the innings. The pair kept playing big shots after gathering runs for their team.

Harmanpreet brought up her half-century in the 34 delivery while hammering Australian bowlers all around the ground. The duo took their team’s score beyond the 100-run mark in the 14 over while smashing sixes and fours.

Megan Schutt gave her team a much-needed breakthrough as she dismissed Jemimah Rodrigues for 33 runs. Rodrigues’ wicket invited Pooja Vastrakar to the crease.

Vastrakar could not do much as she went back to the pavilion scoring just one run. Harmanpreet shortly after followed Vastrakar in the hut as she was dismissed by Ashleigh Gardner after scoring 65 runs.

Deepti Sharma and Sneh Rana tried to anchor the innings and played some big shorts to ease the pressure from the Women in Blue.

But Sneh Rana’s stint at the crease was short-lived as she departed after being run out. Yastika Bhatia then came to the craese. In the thrilling 19th over Deepti Sharma was dismissed after scoring 13 runs in 8 balls.

In the last over of the match, India needed 11 runs. In the 20th over Yastika Bhatia was sent back to the hut by Jess Jonassen.

The fighting Indian unit was unable to chase the score as they were bundled out on 152 to hand Australia the maiden Commonwealth Games cricket champions title.

Opted to bat first, Australia got off to bad start as Indian pacer Renuka Singh struck early with the ball once again in this all-important gold medal match dismissing opening batter Alyssa Healy for seven runs.

Healy tried to play a shot across the line but could not get any connection on the ball that crashed onto her pads, trapping her leg before the wicket.

It was a positive breakthrough for Harmanpreet Kaur’s team as at the end of four overs, the Aussies were at 22/1.

Opener Beth Mooney and skipper Meg Lanning shifted gears and started batting aggressively. The duo kept piling up runs by good running between the wicket in every over.

But Meg Lanning was sent back to the hut as she was run out for 36 at the non-striker’s end by Radha Yadav. In the very next over Australia lost another wicket as Tahlia McGrath was dismissed on Deepti Sharma’s delivery.

After the 12 over of the innings, new batter Ashleigh Gardner smashed two back-to-back fours in Deepti Sharma’s over.

In the 16th over of the innings, Sneh Rana gave her team a big breakthrough as she dismissed Ashleigh Gardner for 25 runs in 15 deliveries.

Mooney in red-hot form hammered Indian bowlers all around the ground and brought up her half-century in the 16th over with a blistering four.

In the 17th over, Renuka dismissed new batter Grace Harris, leaving Australia tottering on 133/5. Deepti Sharma took a one-handed sensational catch of Mooney (61) on the delivery of Sneh Rana.

In the last over of the innings, the lower order of Australia failed to score runs as Deepti Sharma ended the first innings with just conceding five runs in the 20th over to leave Australia’s total at 161/8.