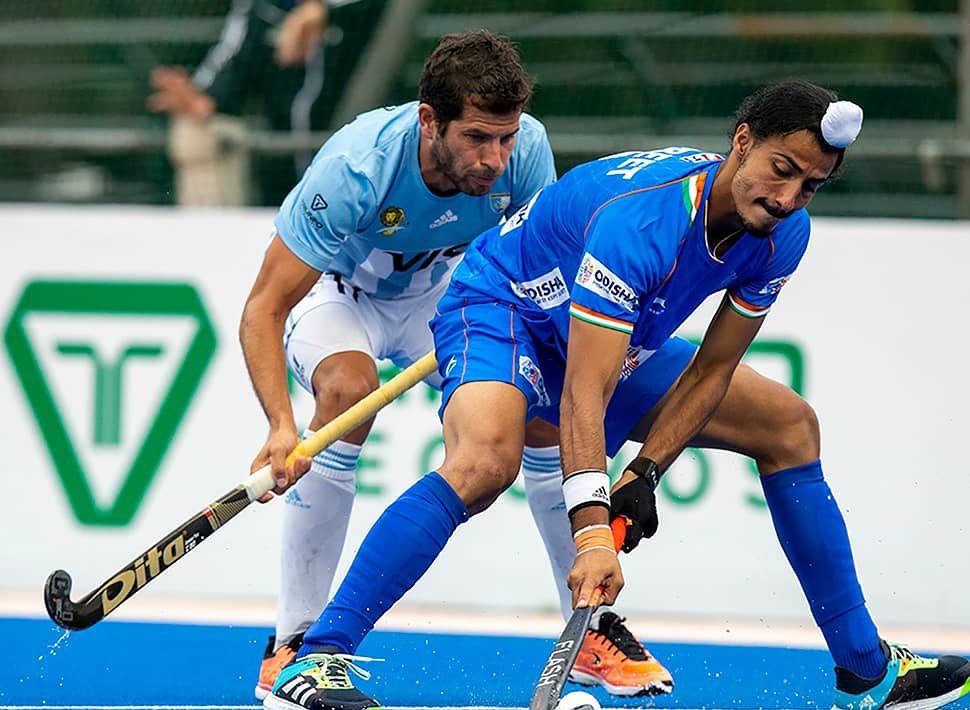 Buenos Aires: Harmanpreet Singh and goalkeeping stalwart PR Sreejesh emerged India’s heroes as the visitors defeated Olympic champions Argentina 3-2 in a thrilling shoot-out after the teams were locked 2-2 at the end of regulation time, in the FIH Pro League match on Sunday.

A penalty corner earned by skipper Manpreet Singh with 25 seconds left for the final hooter changed the course of the tense contest against the hosts, who looked set for victory with a 2-1 lead.

Harmanpreet scored his second goal in the 60th minute with a superb drag-flick to fetch India a 2-2 equaliser, pushing the contest into a penalty shoot-out.

India’s Lalit Upadhyay, Rupinder Pal Singh and Dilpreet Singh were on target in the shoot-out, while goalkeeping stalwart Sreejesh came up with some breath-taking saves to fetch India a bonus point.

The second match of the FIH Pro League will be played on Monday.

Earlier, India drew the first blood after a barren first quarter with a penalty corner earned in the 21st minute. India vice-captain Harmanpreet made a clinical interception and struck a fierce shot to give India the much-needed lead.

Argentina put the Indian defence under tremendous pressure thereafter and their efforts paid off with the visitors conceding a penalty corner in the 28th minute.

Martin Ferreiro was impeccable in his execution, scoring the equaliser. He was also responsible for Argentina’s second goal through yet another penalty corner two minutes later, ending the second quarter with a 2-1 lead.

With the scoreboard reading 2-1 at the start of the deciding quarter, the contest went down to the wire. Desperate to win after going down to Germany in the FIH Pro League double-header last week, Argentina played resolutely to thwart India’s charge.

Pressure mounted further after Varun Kumar was forced to sit out with a yellow card. But Manpreet’s effort with 25 seconds left on the clock ensured a successful outing for India.

“I think the biggest takeaway from this match is our fighting spirit. We didn’t lose hope until the last minute and we fought back really hard to earn this result,” said Harmanpreet.