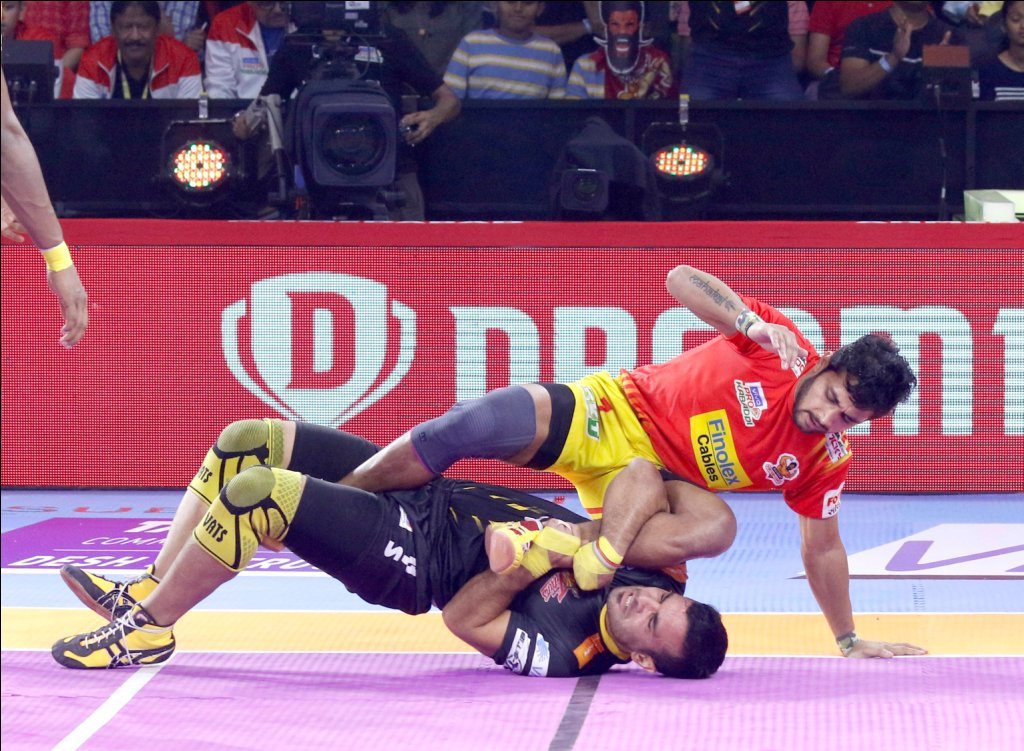 Abozar Mighani and Rohit Gulia in action on Sunday in Ahmedabad.

Ne Delhi: Telugu Titans were led by a commanding Vishal Bhardwaj as they defeated Gujarat Fortunegiants 30-24 here on Sunday. Siddharth Desai picked up 7 raid points, but it was the 16 tackle point performance of the Telugu Titans defence that ultimately guided them to their first Season 7 victory.

The Desai brothers – Siddharth and Suraj – started off with successful raids to get Telugu Titans off to a good start. Amit Kumar then stepped up as the third raider to send Gujarat Fortunegiants’ primary raider Sachin to the bench.

Telugu Titans captain Abozar Mohajermighani stepped up at a vital time for his team, first sending back Gujarat Fortunegiants’ most successful raider of the season Gulia and then taking down More G B to send the visitors’ lead up to six points.

Bhainswal, though, stood strong for Gujarat Fortunegiants and picked up Suraj Desai twice in Do-or-Die raids to keep the score difference in check. Armaan then came in with just over a minute left in the contest and was tackled down.

In a match where defenders ruled the mat, Vishal Bhardwaj stood out with a power-packed performance!

But Ankit, who had stepped out of bounds, was involved in the tackle giving the point to Telugu Titans. The six-point gap this opened up remained till the end of the match as Telugu Titans went on the claim their first-ever of Pro Kabaddi victory over Gujarat Fortunegiants.

Haryana Steelers prevailed over Bengaluru Bulls by a scoreline for 33-30 in a game that went to the final raid. Vikash Kandola starred for Haryana Steelers with his second Super 10 in as many games.

Bengaluru Bulls’ raiders Pawan Sehrawat and Rohit Kumar were off the blocks quickly and combined for five raid points in the first four minutes, as they raced to a 6-1 lead.

.@BengaluruBulls looked on course to score another win but fell prey to a double-Vikas whammy – Kandola with a Super 10 & Kale with a High-5 – as @HaryanaSteelers made an incredible comeback!

Vikas Kale’s tackle on Sumit Singh and Kandola’s successful raid in a Do-Or-Die situation put Haryana Steelers up by two points with just over two minutes left in the contest.

But Mohit Sehrawat’s touch point on Kuldeep revived Pawan Sehrawat and the reigning MVP showcased his value as a defender, tackling down Kandola to level the scores with under a minute to go in the match.

Sehrawat then came in to raid but was tackled by veteran Dharmaraj Cheralathan, which gave Haryana Steelers a slender lead with seconds left in the contest.

Vinay then successfully managed to get through Mahender Singh’s tackle attempt to put his team up by two. Rohit’s 10th raid point of the night brought Bengaluru Bulls within one point of Haryana Steelers. But Kandola came through for his team in final raid of the contest with a two-point raid, confirming their victory.