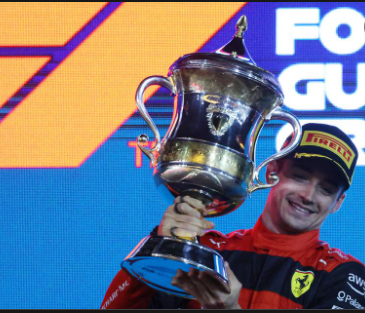 New Delhi: Charles Leclerc of Ferrari won a dramatic Formula One season-opening Bahrain Grand Prix on Sunday after reigning champion Max Verstappen limped out with an electrical issue two laps before the end.

Carlos Sainz made it a Ferrari one-two while Sergio Perez completed a disastrous day for Verstappen’s Red Bull by spinning out of the race on the last lap with a mechanical problem, handing third place to Lewis Hamilton.

George Russell, in his first race since joining Hamilton at Mercedes to replace Valtteri Bottas, took fourth place to give Mercedes a score of 27 points that they could not have dreamed of in the middle of the race.

For Leclerc, who kept his cool when he and Verstappen exchanged the lead five times in two laps in a furious start to the race, the victory was pure delight.

“That’s exactly how we should start the season. One-two baby, one-two. Mamma mia,” the man from Monaco said on the team radio.

Once the race trophy was in his hands, Leclerc said: “I’m so happy. We knew this was a big opportunity for the team and the guys have done an incredible job building an amazing car.

“A one-two today with Carlos – we couldn’t hope for better. It’s incredible to be back at the top.”

There was also a remarkable outcome for Haas, the team which failed to score a single point last season and was forced to replace Russian driver Nikita Mazepin – and his tycoon father’s sponsorship of the team – as a result of the invasion of Ukraine.

The driver who replaced him, Kevin Magnussen, finished fifth in the Dane’s first race since 2020 to collect 10 points.

Zhou Guanyu made history as he scored China’s first point F1 after steering his Alfa Romeo to tenth.

Leclerc’s start from pole position was immediately challenged by Verstappen under the lights in the Gulf but he fought back to regain the lead.

By lap 37 of 57, Verstappen was arguing with his own team over their instructions from the pit lane and Leclerc had extended his lead to 2.3 seconds and held onto it for a deserved victory.

The race was disrupted when the safety car came out on the 51st lap after Pierre Gasly had to jump out of his AlphaTauri before it burst into flames.

When racing resumed, Sainz attacked Verstappen for second place but the Dutchman’s race ended in bitter disappointment as he appeared to lose all power on the 55th lap and had to limp into the pits without a point.

“It was very hard out there, a lot of different issues we had to deal with and this is of course what you don’t what to have on the first race weekend,” said Verstappen.

“It was not great today, we didn’t show what we could do for whatever reason but there is potential. We’ve already lost a lot of points in this weekend, that’s really not good.”

While Christian Horner and his Red Bull team were digesting the champion’s failure to finish, Perez suddenly spun and came to a halt, apparently due to engine failure.

“It was such a difficult race – we’ve struggled throughout practice and this was the best result we could hope for. We’re grateful for these points.”

There is little rest for the drivers as they move on to Saudi Arabia for next weekend’s race.