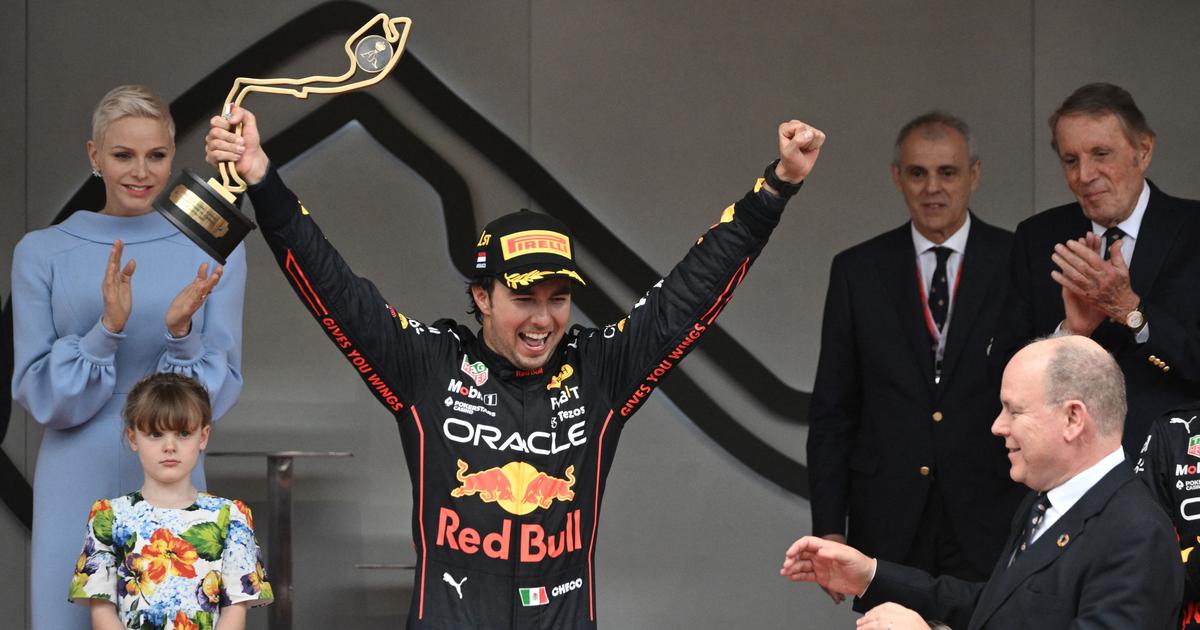 Sergio Perez celebrates with his trophy after the Monaco Grand Prix

Local favourite Charles Leclerc finished fourth in the second Ferrari after a confused double pit-stop cost him his position as leader.

For the Monegasque driver, there was little consolation in finishing the race for the first time after starting from pole.

“I have no words,” said a bitterly disappointed Leclerc on team radio.

An altogether happier Perez was basking in getting his hands on one of the jewels in the F1 calendar.

“As a driver you dream of winning here. After your home race, there is no other more special weekend to win. It’s a massive day for myself and my country.”

It was Perez’s first win of the season, ending the domination of Verstappen and Leclerc, and the third of his career, making him the most successful Mexican F1 driver, moving one clear of Pedro Rodriguez.

Verstappen was philosophical with a result that moved him nine points ahead of Leclerc in the drivers’ championship.

“I tried the best I could and as a team we did a really good job with the strategy,” he said, congratulating Perez on his win.

George Russell came home fifth for Mercedes with a well-judged drive ahead of fellow-Briton Lando Norris of McLaren, two-time champion Fernando Alonso of Alpine and a frustrated Lewis Hamilton, the seven-time champion unable to make passing progress in his Mercedes.

Vettel’s fellow-German Mick Schumacher survived a spectacular crash when his Haas car split in two after hitting the barriers.

After an hour’s delay due to heavy rain and a sequence of cautious decisions by Race Control, followed by two laps behind the Safety Car, the race finally began with a rolling start.

In spite of the tension, Leclerc made a smooth start and led Sainz through Ste Devote and up the hill, followed by the rest in grid order amid plumes of spray.

Leclerc led by 5.4 seconds after 16 laps with Sainz 2.3 clear of Perez who traded his wet tyres for ‘inters’ allowing Verstappen to take third, followed by Norris and then on lap 19, Leclerc, who re-joined third 13 seconds behind new leader Sainz and Perez.

Ferrari, on lap 21, pitted both Sainz and, unexpectedly, Leclerc in a ‘double stack’ stop for slicks that left the Monegasque driver in a fury, complaining it had cost him places.

In a blur of confused radio messages, Leclerc was called in and then asked to stay out as Ferrari realised that Red Bull were also pitting their men for slicks, but it was too late.

As he ranted, Red Bull pitted and emerged on slicks ahead of their respective Ferrari rivals. By lap 26, Perez led ahead of Sainz and Verstappen, with the luckless Leclerc in fourth.

Two laps later, the race was halted again when Schumacher lost control and smashed into the barriers in the Swimming Pool complex.

His Haas car was severed in two, the gearbox, rear axle and rear wing cut apart, but he emerged unhurt as the Safety Car was deployed again followed by a red flag to allow for the barriers to be repaired.

When the action re-started, behind the Safety Car on lap 31, Ferrari had switched to used hard dry tyres, and the rest to mediums, for the estimated final 32 laps to the flag as racing resumed in a ‘timed’ contest.

But overtaking proved difficult, if not impossible.

With 10 minutes remaining, the top four were separated by two seconds, with Perez hanging on with his worn tyres and Sainz attacking him.

Russell remained fifth, eight seconds adrift, but ahead of Norris as the race ended with a two-hour cut off.