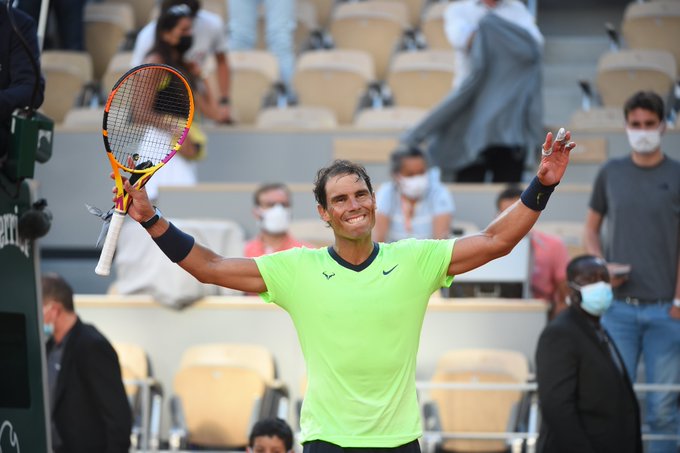 Nadal, who is yet to drop a set in Paris since the 2019 final, was given an early scare by Sinner before recovering late in the first set and then proceeding to close out the game 7-5, 6-3, 6-0.

Novak Djokovic survived a major scare from teenager Lorenzo Musetti on Monday to reach a 15th French Open quarter-final and stay on course to become the first man in over 50 years to win all four Grand Slams twice.

The world number one dropped the first two sets, then comfortably levelled before the 19-year-old Italian retired in the final set.

Djokovic, the 2016 champion and chasing a 19th major, was facing his earliest exit in Paris since 2009 when 19-year-old Musetti stormed through the first two sets, hitting blistering winners and finding the acutest of angles.

But the 76th-ranked Italian, making his Grand Slam debut, then went dramatically off the boil.

Where the first two sets had taken 75 and 66 minutes, Djokovic swept the third in 24 minutes and the fourth in just 17.

Musetti won only 14 points in the third and fourth sets before leaving the court for a medical time-out.

Djokovic broke for 1-0 in the decider, injuring a finger as he smashed a winner while losing his balance and falling into the clay.

Musetti gamely fought on but after being broken twice again, he called it quits.