"Frustrated" Markram punches object, injures wrist to be ruled out of 3rd Test 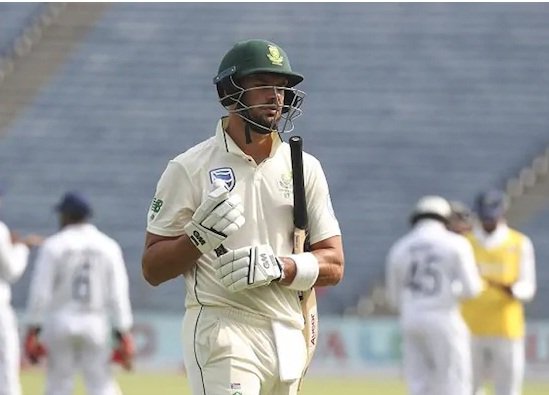 Ranchi: A “frustrated” South African batsman Aiden Markram was on Thursday ruled out of the third and final Test against India, having sustained a wrist injury after punching a solid object.

As per Cricket South Africa’s media release, “The injury took place following the opener’s dismissal in the second innings of the match. In a moment of frustration with his own performance, he lashed out at a solid object, resulting in his injury.”

South Africa have already conceded the series having suffered two heavy defeats in Visakhapatnam and Pune.

Markram has had a mixed tour of India. While he scored two hundreds in the practice games, he couldn’t carry forward his form into the Test series. After scoring 5 and 39 in the first Test, he was dismissed for a pair in the second.

“Standard Bank Proteas batsman Aiden Markram has been ruled out of the third and final Freedom Series Test match after sustaining an injury to his right wrist during the second match in Pune,” Cricket South Africa said in a release.

Team doctor Hashendra Ramjee said, “A CT scan of Aiden Markram’s wrist showed a fracture involving the wrist bones. The medical team has, therefore, ruled him out of the next Test match against India. Arrangements have been made for him to see a specialist on his return to South Africa for further management of the injury.”

Markram left for South Africa on Thursday morning. The team management hasn’t called up any replacement. The third Test starts here on Saturday.

A disappointed Markram admitted he has let his team down and said, “It’s sad to be going home on this note and I completely understand what I’ve done wrong and take full accountability for it.

“It’s unacceptable in a Proteas environment and to let the team down is what hurts me the most. I’ve learned a lot from this and the other players I’m sure, have learned from it as well.

“We understand in sport that emotions run high and sometimes the frustration gets the better of you as it did for me, but like I said, it’s no excuse.

“I’ve taken full responsibility for it, I have apologised to the team and hopefully I can make it up to them and the people of South Africa soon.”

Dravid supervises training of aspiring cricketers from 16 countries at NCA