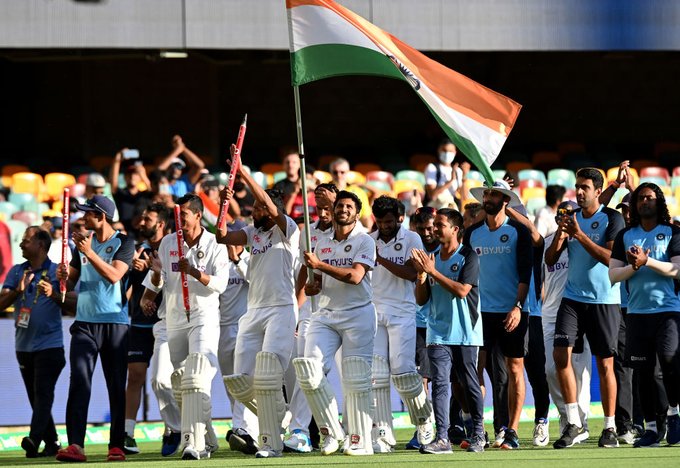 Brisbane: A fearless India, driven by its courageous youngsters, pulled of an exhilarating three-wicket win over Australia in the fourth Test to claim the series 2-1 and retain the Border-Gavaskar Trophy here on Tuesday.

Resuming at four for none on the final day, India overhauled the target with 18 balls to spare in a match that went down to the wire.

Rishabh Pant led the chase with his aggressive yet mature unbeaten 89 while Shubman Gill scored 91.

Cheteshwar Pujara enduring many a painful blows on his body in his dogged 56-run knock that he raised with a 211-ball vigil.

Australia had won the pink-ball Adelaide Test while India struck back with victory in Melbourne. The third Test in Sydney had ended in a draw.

India had won a historic Test series Down Under two years back and now the team is cherishing back-to-back series victory.

The visitors had lost the ODI series before winning the T20 series that preceded the Test rubber.

Just a remarkable win…To go to Australia and win a test series in this way ..will be remembered in the history of indian cricket forever ..Bcci announces a 5 cr bonus for the team ..The value of this win is beyond any number ..well done to every member of the touring party..

At the start, India lost experienced vice captain Rohit Sharma (7) early but young Gill rose to the occasion with an impressive knock that kept India in the hunt as Pujara dug heels on the other end.

Rahane did try to build on the good start with his short but attacking 24-run knock before his sift dismissal.

With Pant’s ability to strike the ball at brisk pace, India always had a chance to got for the kill.

Pant pulled off some breathtaking cover drives off Pat Cummins and Josh Hazlewood in the final session though he benefitted from missed stumping chance.