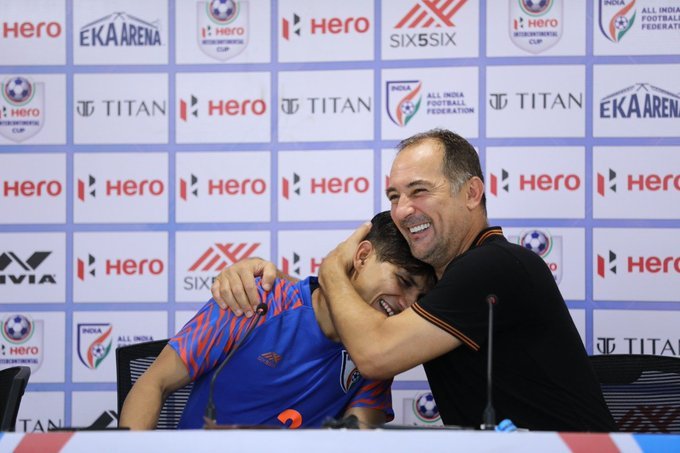 Talented young footballer Narender Gahlot's stock has risen after scoring against Syria in the Intercontinental Cup.

Six years ago, a 13-year-old boy from the Capital’s Najafgarh area used to travel daily on this route to train in Josh academy, in which Das is a trustee.

The boy, Narender Gahlot, is currently on a high after scoring India’s only goal against Syria in Intercontinental Cup. “Narender is from a humble background. He used to travel a long distance on a daily basis to train in our academy. But we certainly found him a natural central defender, who could play at top level,” Das remembered.

Das has been proved right. From the Delhi based academy, Gahlot moved to Minerva FC and then showed his mettle for Indian Arrows in the I-League. He has now been recruited by a franchise in the cash-rich tournament, officially the country’s top league.

1⃣8⃣-year-old Narender Gahlot scored his first #BlueTigers 🐯 goal with a thumping header 💥 as India 🇮🇳 played out a 1⃣-1⃣ draw against Syria 🇸🇾.

In three matches in the Intercontinental Cup, India, under Igor Stimac, conceded 10 goals, logged just one point and ended up winless. From statistical point of view, a disappointing show on the eve of the 2022 World Cup qualifiers.

But Mark Twain once famously said: “lies, damned lies, and statistics.” In this case, we would like to believe the American writer. After all, Stimac has raised hopes by introducing a host of youngsters to the national side. Indian fans expect these boys to learn from their mistakes and excel. Gahlot is one of them.

One gets a curious feeling while going through the list of newcomers in the national squad. All of them, from Jerry Lalrinzuala to Jobby Justin, are basically products of I-League clubs before they switched over to different franchises because of better financial offers.

The grassroots and youth development programme of the franchises, which received high praise from All India Football Federation’s (AIFF) executive committee on July 9, seems to have escaped the notice of Stimac!

Sahal Abdul Samad never played for an I-League club but he learned his football in an academy in the UAE. He also played at the university level in Kerala and Santosh Trophy for the state before joining a franchise unit.

Manvir Singh spent his youth career in the much-maligned Minerva Punjab FC (like Gahlot) and then joined Mohammedan Sporting.

Well, the list could be longer in the post-2014 scenario. So, let’s not start a debate (unlike the AIFF press release) on who should receive accolades for developmental work and, of course, bag the Asian Champions League (ACL) spot.

Many eyebrows have been raised after India conceded nine goals in the first two matches against Tajikistan and DPR Korea. Rarely in the past few years India fared so poorly against their Asian rivals.

Stimac’s decision to play around 30 players in the King’s Cup in Thailand and the Intercontinental Cup is under question.

Spare a thought for the coach. He had to enter the Intercontinental Cup without a top player in every key position. Central defender Anas Edathodika had an injury. Central midfielder Pranoy Haldar suffered the same fate on the eve of campaign.

Striker Jeje Lalpekhlua is yet to recover from the operation he underwent recently. To make it worse, senior central defender Sandesh Jhingan was hardly fit.

In the World Cup qualifiers, India have been grouped with Asian champions Qatar, Oman, Afghanistan and Bangladesh. Not exactly an easy group, but if India can log around 15 points, then they can hope to make the next round as one of the four second best teams from eight groups.

Fans would expect Stimac to make up his mind on his first 14 footballers, at least.