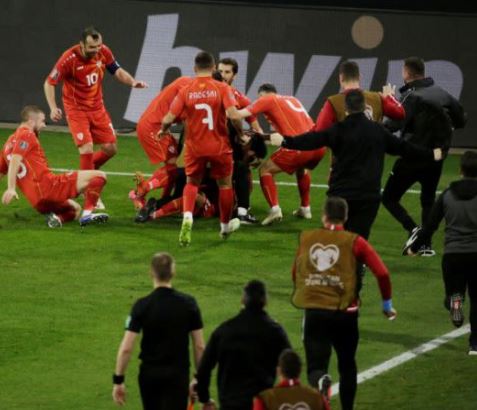 Duisburg (Germany): Joachim Loew’s final World Cup qualifier as Germany coach ended in a shock defeat to North Macedonia as Eljif Elmas struck late to give the visitors a 2-1 win.

Elmas nudged home from close-range, with the aid of a slight deflection, five minutes from time after veteran Goran Pandev had given North Macedonia the lead in first half injury-time on Wednesday, DPA news reports.

Ilkay Guendogan levelled from the spot midway through the second half and Timo Werner mis-kicked a rare chance with the goal at his mercy to give Germany the lead.

“I don’t know how to explain it,” said Guendogan, who was captain in the absence of the injured Toni Kroos.

“It’s not easy to do. We knew that we couldn’t underestimate the opponent and I don’t think we did that. We just weren’t good enough tonight and have to be better in front of goal, otherwise we extend the invite in games like this,” he said.

But North Macedonia will feel their win was deserved, especially as Emre Can escaped a blatant handball in the box and with no video review referee available their protests were ignored.

“The guys have once again made our nation proud, against the four-time world champions, and three-time European champions,” said North Macedonia coach Igor Angelovski.

“Our team are our heroes, they have brought the nation to its feet.”

The win takes North Macedonia second in Group J on six points, above Germany on goals scored, three shy of shock leaders Armenia, who beat Romania 3-2 to have a perfect nine points from the opening triple-header.

Iceland won 4-1 at Lichtenstein in the other game.

Loew will end his 15-year reign as national coach, which included the World Cup win in 2014, after Euro 2020 delayed to summer because of the coronavirus pandemic.

His farewell continues with tune-up against Denmark on June 2 while his successor — as yet undecided — will debut away to Lichtenstein on September 2 when Germany resume the path to the 2022 World Cup.

Leon Goretzka hit the bar early for Germany and Serge Gnabry shot over from a clever header by Robin Gosens, who was brought into the team on the left after injury.

“We know we have to do better when it comes to our chance conversion, but I’m not worried about the Euros,” said Gnabry. “It hasn’t started yet and we still have time to put the work in that we need to.”

But North Macedonia, who qualified for their maiden finals at Euro 2020 through the Nations League and play-offs, were solid and only a quick reaction from Marc-Andre ter Stegen, deputizing in goals for Manuel Neuer, kept out Ezgjan Alioski’s free kick.

The goal did come when Enis Bardhi brilliantly controlled the ball in the box and crossed to give 37-year-old Pandev a tap-in for his 37th international goal.

Alioski clipped Leroy Sane in the box to let Guendogan level and Germany should have won the game when Werner was set up perfectly only to duff his shot wide.

That would have been cruel on North Macedonia, who moments earlier had a stonewall penalty not given for Can’s handball at a corner.

They were not to be denied though and Arijan Ademi’s cut-back was met by Elmas to secure a famous win.