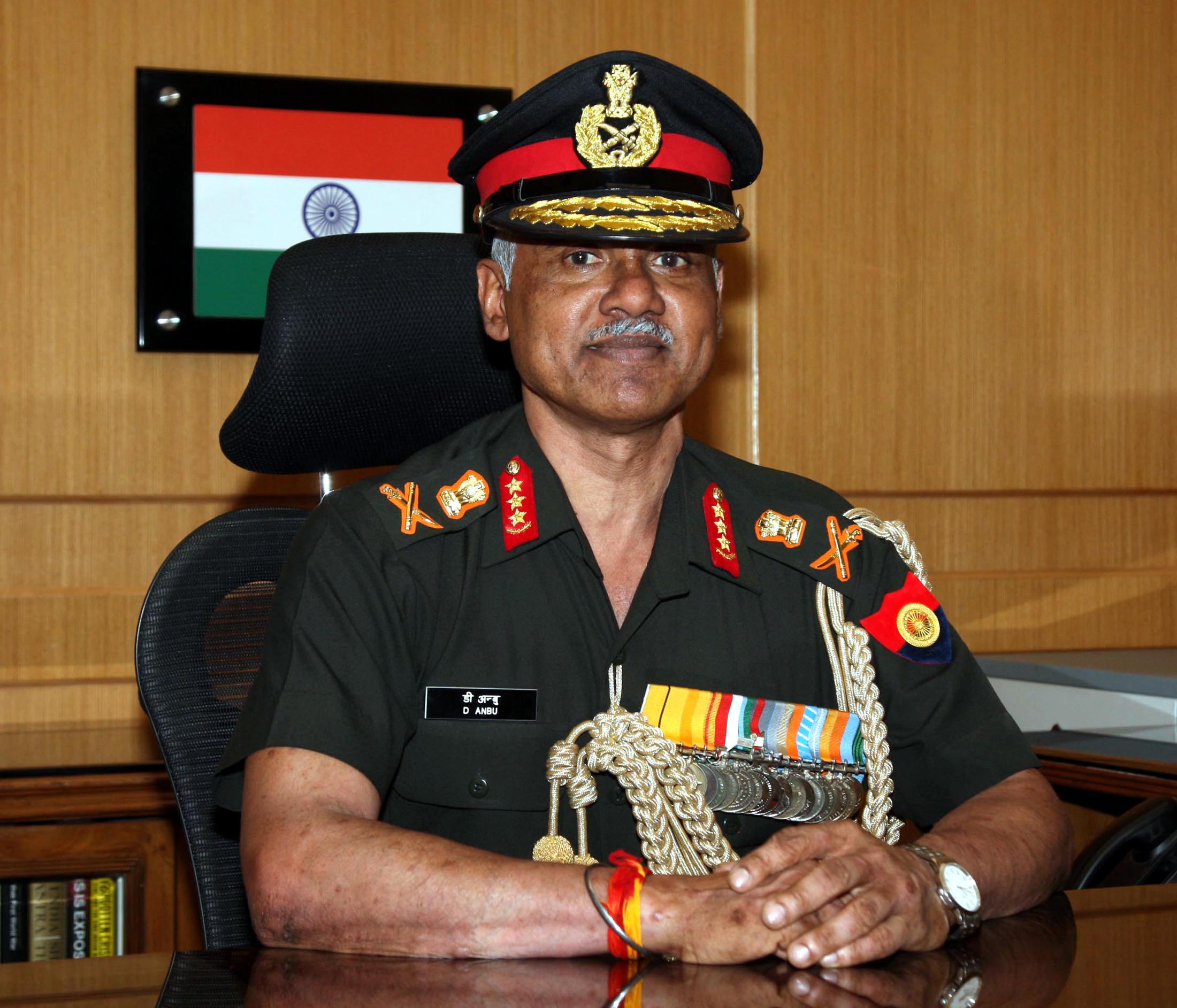 Lt. Gen. Devraj Anbu, who is also the Vice-Chief of Army Staff since May 31, 2018, is under scrutiny for working as acting president of the Indian Golf Union.

New Delhi: The Indian Golf Union (IGU) stands derecognised by the Ministry of Youth Affairs & Sports headed by Kiren Rijiju. But the bigger question is will the IGU overcome the National Sports Development Code (NSDC) 2011 diktat in the current scenario it is in despite getting “preferential” treatment at the hands of the government to put its house in order.

Four extensions of interim recognition and almost a two-year time after it was suspended in 2017, the IGU let the momentum slip from its hands it should have seized seriously. Now, all it is doing to present before the Sports Ministry is a Calcutta High Court observation which suggests the ‘appropriate authorities’ not to de-recognise the IGU till an appeal is disposed by the court.

Maj. Gen. Bibhuti Bhushan (Retd.), IGU director general, confirmed Sports Lounge that it has requested the ministry to recognise the IGU again on the basis of the court observation. In our last story we had talked about the IGU’s request for a fifth extension of interim recognition and the several legal cases they are facing.

“The Calcutta High Court in its decision last month said that the pendency of the matter before us may be cited before the appropriate authority not to de-recognise the IGU till the appeal is disposed off by us. The next hearing is on July 30,” Bhushan told the online sports portal.

The problem with IGU’s argument is the court has made an observation. Nowhere it has said the ministry is bound by its decision, nor there is any direct instruction that the derecognition must be annulled with immediate effect. 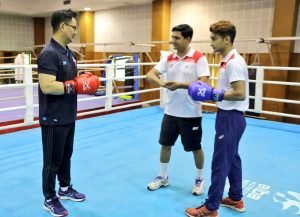 Sports Minister Kiren Rijiju (L) is determined to make all NSFs comply with the Sports Code 2011.

Rijiju, who took over from accomplished shooter Rajyavardhan Singh Rathore, as the Sports Minister recently made it clear in the Lok Sabha that all National Sports Federations (NSFs) need to comply with NSDC.

Responding to a question by Trinamool Congress MP Sunil Kumar Mondal, Rijiju said: “This ministry has notified the NSDC 2011 effective from 31/01/2011 to ensure transparency and accountability in the functioning of NSFs for the healthy development of sports. As per the NSDC, NSFs are required to follow democratic and healthy management practices which require them to ensure greater accountability and transparency at all levels; adopt impartial and transparent selection procedures; adhere to age and tenure restrictions of office bearers; adopt and follow the basic universal principles of good governance in sports; adopt proper accounting procedures at all levels and produce annual financial statements; prevent age fraud and sexual harassment of women; comply with the provisions of the Right to Information Act; and hold elections as per model election guidelines issued by the government.”

The matter is now in the hands of the Indian Olympic Association (IOA) which may form an ad hoc committee with a ministry official as its member to run the sports in India.

However, the golf body needs to undertake a long winding route to sort out various issues it has only complicated over the years. The biggest point of contention has been the excessive intervention of the Armed Forces, especially the Indian Army, in the governance/administration of the national federation. The IGU’s previous governance structure had five zones—East, West, North, South and Army—with the presidential post presented annually on a rotational basis. This was questioned by the Sports Ministry, forcing them to draft a new governance code as per the NSDC.

The same was highlighted by the Justice Lodha Committee recommendations that all sports federations must be free from any ‘government interference’ also featured in the “Olympic Charter”, part of the International Olympic Committee (IOC), that gives recognition to various NSFs in India through the IOA.

The latest RTI reply, in possession of Sports Lounge, clearly mentions the conditions under which an army official can get involved in sports bodies or any institutions. Article 19/Chapter V of the Army Rules 1954 state that no officer/personnel can “assist or take any active part in, any society, institution or organisation, not recognised as part of the Armed Forces of the Union; unless it be of a recreational or religious nature in which case prior sanction of the superior officer shall be obtained”.

Please mark that the association must be of a “recreational” nature. Considering this, the appointment of Lt. Gen. Devraj Anbu, who is also the Vice-Chief of Army Staff,  as the acting president of IGU is in direct violation of the Indian Army guidelines.

It has also been alleged that the acting president used his influential position in the Army to persuade previous Sports Minister Rathore to extend the interim recognition to IGU thrice since his appointment last April. Rathore, being an ex-Armyman, had to pay heed to a senior defence officer, it’s further alleged.

To explain the Army guidelines, membership in a club (for playing golf and using club facilities) is certainly recreational but heading a NSF is certainly not recreational and goes against the spirit of NSDC, which is about bringing professionalism/accountability in sports.

As an acting president, Lt. Gen. Devraj Anbu not only convenes the Annual General Meeting (AGM), but he also approves the utilisation of Sports Ministry grants and various expenditures incurred by the IGU. He is also the final authority on the appointment of different IGU committees, selection of golfers for international competitions and appointment of team managers/coaches/training staff etc.

The defence forces are well-known for their discipline and understanding of rules. However, in this case someone enjoying the second most senior rank in the Indian Army chose to ignore its own rulebook.

Should army officers still be allowed to hold top positions is an issue the golf fraternity should seriously look into.

In another RTI reply, what has come to light is Army/defence state units or facilities thereof aren’t allowed to become members of any sports body without prior permission (or without a No Objection Certificate) of the Army Sports Control Board (ASCB) or the Services Sports Control Board (SSCB), the final authority affiliated to the IOA in this case. 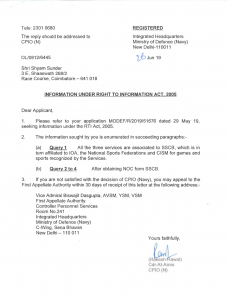 In the same RTI, filed by Shyam Sunder, vice-president of the Ooty Gymkhana Club, army’s chief information officer, Rakesh Rawat, clarifies whether defence personnel can join sports federations and whether defence units are eligible to become part of sports bodies. In his reply dated June 26, Rawat said, “After obtaining NOC from SSCB.”

“The RTI is making the NOC condition a must, but none of the army units, associated with state golf associations, has taken a NOC from the SSCB. Now, how can they become part of sports bodies when they violating an important defence rule?,” Sunder asked.

In most Olympic sports, like boxing and athletics, defence teams participate under the banner of SSCB, but golf and equestrian are exceptions where SSCB is nowhere in picture. The issue of army officers’ interference doesn’t end here. The training areas where golf is played as a recreational activity are affiliated as clubs under by the IGU. They can attend the AGM and have the voting rights.

In a RTI reply on March 27, Amit Sharma, information officer of the Indian Army, categorically said army clubs are ‘common training areas used for weapon training and obstacle training’. An ex-IGU official said the presence of army personnel has long been an objectionable issue and it can be contested in a court.

“The IGU has to resolve the issue of army clubs if it wants to put its house in order. The army clubs are not for common use. They are for army officers where they also allow some junior officers to play. While the Sports Code 2011 says that the voting rights should be given to the bodies working at grassroot level,” an ex-IGU official said on the condition of anonymity.

He added, “Tomorrow, if someone goes in the court against the presence of army officers in associations or status of army training areas as clubs, IGU will again be caught on the wrong foot.”

Where does the IGU stand after derecognition?

As reported by Sports Longue last month, the ministry in its letter dated March 8 had extended the IGU’s interim recognition to June 30. The IGU failed to conduct elections and put the house in order within the deadline. The derecognition came into effect from July 1. The ministry and the IOA has removed the IGU’s name from its list of recognised sports federations. In Parliament last Thursday, Sports Ministry informed the lower house that a total 56 recognised NSFs are affiliated to it and IGU’s name was not mentioned in the list.

A Sports Ministry source said, “Since we had already informed them about derecognition in our March letter, we needed not to issue a fresh directive. They had been given enough time to hold the elections and implement the sports code. They failed to come up with a solution.”

The IOA may now form an ad hoc committee as it did when the boxing federation was derecognised by Sports Ministry. The ministry may also appoint a government observer to oversee the election process.

However, the silver lining among the dark clouds hovering over IGU is that the golfers won’t get affected by derecognition. Their training and participation in domestic and international tournaments including the 2020 Tokyo Olympic Games will continue. The ministry has already passed the IGU’s annual calendar, so there will be no stoppage of golf activities.

In order to form an ad hoc committee or conduct elections, the ministry or the IOA has to move to the golf fraternity, but if it is indulging in infighting, issues getting resolved is highly unlikely.

Bhushan told Sports Longue, “We are serious about enforcing the Sports Code and holding elections, but parties with vested interest don’t want us to do it. They have filed court cases and don’t seem interested to get them resolved. There is also a talk of settlement out of court, but nothing has materialised yet.”

Hearings of as many as five cases against the IGU is pending in July. The IGU has spent hefty amount on fees of lawyers. The IGU has hired three law firms to fight their cases, and spent Rs. 77.21 lakh in legal fees till May 2019.

Legal battles, in practicality, aren’t going to help golf fraternity in the long run. If they keep fighting legal battles, the ad hoc committee will also find it difficult to hold fresh elections. The fraternity has to get issues resolved and come under the same page.

Golfers may not get affected by political wrangling, but the image of the sport will be tarnished, meaning the success stories of golfers from marginalised classes would fail to untie the ‘elite’ noose haunting the sport since the British Raj.

Stage set for Hero Challenge at Renaissance Club in Scotland

Shaghil Bilali has been associated with sports journalism for more than a decade. He covered golf and boxing extensively. He has been an avid follower of Olympic sports. He worked with Mail Today newspaper for nine years and also had a stint with the News18's website -- Cricketnext. He is currently working with www.msn.com as a senior associate editor.