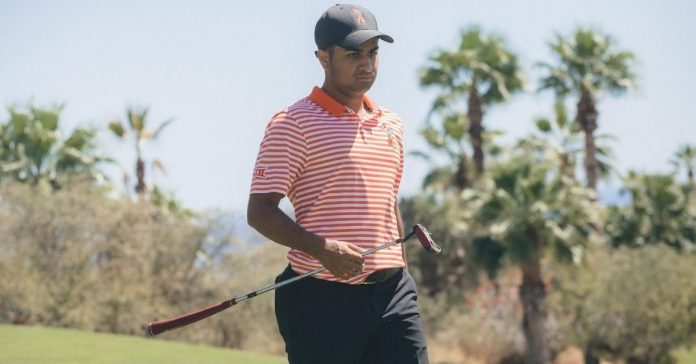 Bandon (Oregon): Aman Gupta, a 21-year-old American youngster of Indian origin, made the most of a last-minute entry into the 120th U.S. Amateur Championship by shooting a bogey-free 64, taking a share of the first round lead at Bandon Dunes Golf Resort.

Four days before the event, Gupta did not have a confirmed place in the field.

Gupta, who is from Oklahoma State University got into the tournament when World No. 2 amateur Ricky Castillo withdrew.

On Monday, Gupta fired a bogey-free seven-under 64 at Par-71 Bandon Trails, to share the lead with McClure Messner, who also shot 64 but at Par-72 Bandon Dunes.

“I thought I had a very good chance (of getting into the field), and Friday afternoon when (the USGA’s) Robbie Z(alzneck) called me and told me I was in, that was a huge relief,” said Gupta, who was already on-site at Bandon Dunes and had undergone all the COVID-19 testing protocols.

“But I still have a tournament to play, so the preparation was just the same as normal.”

Interestingly, the top Indian amateur, Rayhan Thomas, a freshman, who was born in Dubai, also plays for Oklahoma State University.

With a field of 264 players for the 36-hole stroke play, post which the top-64 will move into match play segment at Bandon Dunes. The stroke-play segment is played over two courses at the Bandon Dunes Golf Resort.

His 64 with seven birdies and no bogeys broke the course record at Bandon Trails. Messner’s 64 missed the Bandon Dunes record by one shot. It was also the only bogey-free round of the day.

“I got a new putter on Friday, and it worked out pretty well. I think I had 11 putts on the front nine, so made it pretty easy on myself,” added Gupta, who is from Concord, NC, on his success on the greens.

Gupta, playing in the morning, took advantage of early tee time when the winds were still benign. He had seven birdies over his first nine holes for a stunning 29 and then played even-par golf on the second nine.

Meissner is coming off a playoff victory in the Southern Amateur in mid-July, where Gupta was T-13. Meissner started more than an hour later than Gupta and although the winds gradually increased during the round, the Texas native never felt uncomfortable.

He went out in 4-under 31 and then closed with birdies on three of his last four holes, including a 5-footer on the par-5 finishing hole.

Defending champion Andy Ogletree, vying to become the first player to win consecutive U.S. Amateur titles since Tiger Woods (1994-96), opened with a 74 at Bandon Trails, while 2019 runner-up John Augenstein posted a 2-under 70 at Bandon Dunes.