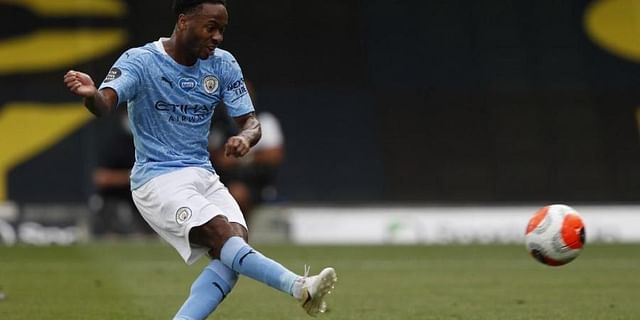 London: Pep Guardiola says he wants Raheem Sterling to fight for his place at Manchester City after the frustrated forward admitted he “would be open” to leaving the Premier League champions.

England forward Sterling has been with City since 2015, when he moved from Liverpool, and has won three Premier League titles with the club.

However, the 26-year-old has made just two league starts this season, struggling with his form and fierce competition from attacking stars including Phil Foden and club record signing Jack Grealish.

Speaking at the FT Business of Sport US Summit on Thursday, Sterling, who has been linked with a loan move to Barcelona, said: “If there was the opportunity to go somewhere else (for more game time), I would be open to it at this moment in time.

“As I said, football is the most important thing to me — challenges that I have set myself from a young age and dreams as well, to play abroad.”

But Guardiola told reporters on Friday that he wanted Sterling to stay with City.

“Raheem is our player and will hopefully be an incredibly important player for us,” he said.

“Some players want to play all the time but I can’t assure them of that. Always they have to speak on the grass — not Raheem, all of them.

“What I want from Raheem and everyone is for them to be happy.”

Despite his few starts, Sterling, whose deal with City runs until 2023, said he would not be running to Guardiola’s office to demand more playing time.

Sterling, who starred for England at Euro 2020, could be in line for a rare start on Saturday against Burnley after City winger Ferran Torres suffered a fractured foot while playing for Spain in the Nations League.

Guardiola revealed he expects the forward to be sidelined for up to three months.

There have been reports Torres picked up his injury against Italy in the Nations League semi-final but still played against France in the final.

But Guardiola denied having any issues over how the player was handled by his national team.

“Injuries can happen here, at home, the national teams. It happens. I know the manager from Spain (Luis Enrique), he treats Ferran as best as possible,” he said.

“He doesn’t want him to get injured. They try to take care but sometimes it happens.”

City will also be without Brazil pair Ederson and Gabriel Jesus for Saturday’s match after both played for their country against Uruguay on Thursday.

Guardiola said he did not know whether they would be available for the Champions League match in Bruges on Tuesday.